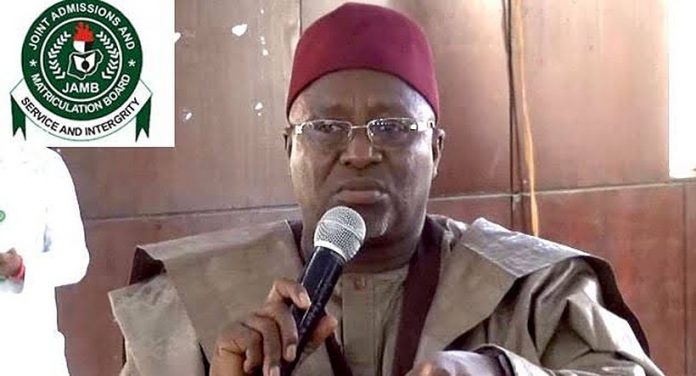 By Gideon Adonai
Despite the barrage of criticisms against some of the choices of his appointees, the regime of the President, Major General Muhammadu Buhari (retd.), appointed a few round pegs in round holes, one of whom is 66-year-old Is-haq Oloyede, a professor of Arabic and Islamic Jurisprudence who brought innovations to the Joint Admissions and Matriculation Board since his first appointment as Registrar on August 6, 2016.
Oloyede was on Friday reappointed by the President for another five-year term as registrar of JAMB, the agency established by the government in 1978 “to conduct matriculation examinations for entry into all universities polytechnics and colleges of education in the country and to place suitably qualified candidates in the available places in these institutions”.
During his first term, Oloyede, amongst other reforms, was noted to have significantly increased the remittances of JAMB to the Federal Government.
A top official at the Board told our correspondent that though “JAMB is not a revenue-generating agency but under Prof Ishaq Oloyede in the last five years, JAMB remitted over ₦30bn to the Federal Government purse, an amount far above what was generated by the Board in its 40 years of existence, before Oloyede came on board.
“This was despite the fact that he reduced the fee for Unified Tertiary Matriculation Examination forms from ₦5,000 to ₦3,500 in 2017.”
“JAMB had remitted a total of ₦50m to the Federal Government between 1978 and 2016 before Oloyede,” the source said.
The official, who spoke on condition of anonymity, because he was not permitted to speak on the matter, also said Oloyede transformed JAMB through the introduction of technology.
“He introduced technology and blocked leakages and avenues for corrupt officials to siphon money from the Board,” the official added.
Notably, JAMB’s annual remittances to the Federal Government under Oloyede rival the yearly profit before tax of some banks. The growing figures of the Board have ranked it in the league of top government agencies with high remittances. They include the Federal Inland Revenue Service, the Nigerian National Petroleum Corporation, the Nigerian Customs Service and the Department of Petroleum Resources, amongst others.
In his early months in office, the nation had been entertained with tales of snakes swallowing millions of naira in JAMB offices and associated corruption charges against officials of the Board.
A former JAMB Registrar, Prof Adedibu Ojerinde, has been in court over an 18-count bordering on alleged fraud and diversion of public funds to the tune of ₦5.2 billion.
In an interview in early 2019, Oloyede had complained about “expanded throats” in JAMB, adding that he found a way to put such people aside so they wouldn’t distract him.
“I find a way to put such people aside. We sack about 10 to 15 people in a year. We don’t stop at sacking them, we take them to court and insist on their prosecution because we have the facts before us,” he had said.

“I did not increase the charges and I thank the Federal Government for reducing the charges. We charge the lowest fee anywhere in the world. President Buhari was kind enough to say slash the fee from ₦5,000 to ₦3,500 and even with that, we will still make a substantial return because we are not stealing their money,” the don had stated.
He had also expressed his thoughts regarding making huge remittances to the government when the money can be used to directly develop the education sector.
“It isn’t the best though where you have billions of naira and you return it back to the government. It is not the best. But that is the legal framework we have to work with. A better stage can be to go to similar institutions around the world where they fund themselves and extend it (the money) to tertiary institutions directly by identifying their needs and supporting them,” Oloyede had said.
However, it has not been all garlands and praises for Oloyede as he had also been criticised severely and several times over the number of students who gain admission yearly. Critics have argued that the Board continues to rake in money for the government while some applicants continue to sit for the exam more than three times before eventually gaining admission into a tertiary institution of their choice.
But Oloyede had maintained that it was important for applicants to study well to pass the UTME before being admitted into any tertiary institution.
Married and blessed with children and grandchildren, Oloyede is a doctoral graduate in Islamics.
He is a fellow of the Islamic Academy of Cambridge, United Kingdom; Fellow, Academy of Entrepreneurship; Fellow All Nigerian Institute Management; Fellow Institute of Arabic and Islamic Studies and Fellow Association of Islamic Religious Studies among others.
He has served on the board of many university organisations. He was the Chairman, Committee of Directors of Academic Planning in Nigerian Universities – 2002 to 2004; He was the President, Association of African Universities. He served on the board of Association of Commonwealth Universities, 2010 to 2012 and International Association of Universities, 2008 to 2012.
He was appointed Co–secretary of the National Political Reform Conference by then President Olusegun Obasanjo in 2006 and also a member of the 2014 National Political Conference. Also in 2006, he was appointed a Consultant by the National Universities Commission on Educational Reforms in Nigeria.
Oloyede served as the Vice-Chancellor, University of Ilorin, Kwara State, from October 2007 to October 2012, and Chairman Association of Vice-Chancellors of Nigeria Universities as well as the Committee of Vice-Chancellors from 2011 to 2012.
As he starts another term of five years as JAMB registrar, the nation and his critics continue to watch keenly, expecting whether he would further drive developmental reforms in the Board or relent, as it is in the habit of many Nigerian government officials and politicians when appointed or elected for second term in office. Only time will tell but for now, congratulations are in order for the native of Abeokuta in Ogun State.