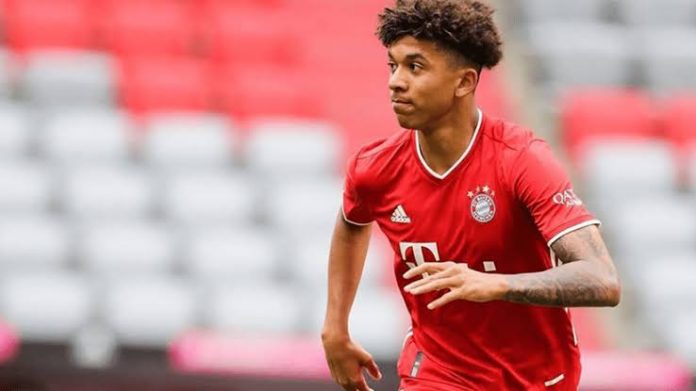 By Gideon Adonai
Chris Richards has got his Bayern Munich contract extended till 2025.
Richards had been loaned out to Hoffenheim earlier.

The 21-year-old US international will still be out to TSG Hoffenheim for the season.

Board member for sport Hasan Salihamidzić said:
“We’re very pleased with how Chris Richards has developed with us, which is why we’ve extended his contract.
Chris is a young player who will now gain further Bundesliga experience at Hoffenheim, which is exactly what he needs.”

Richards joined the German record champions’ U19 side from FC Dallas in 2018.
Richards, born in Birmingham, AL, was a regular with Hoffenheim during a previous loan spell in the second half of last season, making 10 Bundesliga appearances before a hamstring issue ruled him out of the final three games of the campaign.
He is highly regarded at Bayern and was the subject of multiple permanent bids this summer, including several from Premier League clubs. All such offers were rejected.
Bayern head coach Julian Nagelsmann had indicated he was open to keeping Richards last week and has spoken favorably of the center back, who has been in the squad for every match day so far this season, playing 45 minutes in the 12-0 DFB Pokal win over Bremer SV and making a brief appearance in the Bundesliga win over Koln.
“He did a decent job in training, also made a serious impression in the cup,” Nagelsmann said last week. “In one-on-one he is incredibly good.”
Had he stayed at Bayern Richards would have found himself vying for minutes with Tanguy Nianzou as the fourth choice center back behind Niklas Sule, Dayot Upamecano and Lucas Hernandez.
Benjamin Pavard is also available to Nagelsmann and as such it was decided the youngster would benefit from consistent minutes under Sebastian Hoeness.
USA head coach Gregg Berhalter had left Richards out of the squad for World Cup qualifiers against El Salvador, Canada and Honduras to allow him to focus on his future ahead of the closure of the German transfer window at midday ET today.