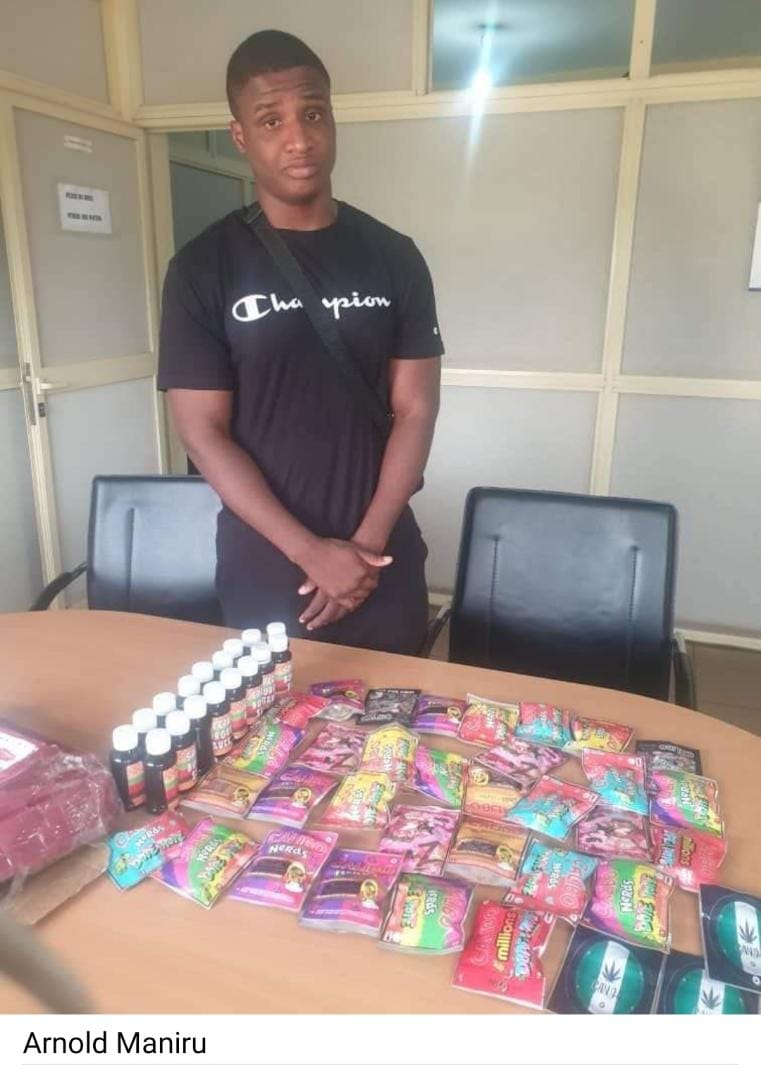 Operatives of the National Drug Law Enforcement Agency, have nabbed a 22-year-old youth corps member, Arnold Maniru, in Abuja for importing 4 kilograms of drugged candies from the United Kingdom.

This was disclosed in a statement issued on Sunday by the NDLEA’s spokesperson Femi Babafemi.

According to the statement, Maniru, a youth corps member serving with a government agency in Abuja, was arrested on Saturday 28th August 2021 following the interception of a consignment at the warehouse of a transport company.

Controlled delivery of the parcel, which contains the candies laced with Arizona, a strong variant of cannabis and some liquid, was subsequently carried out.

In the same vein, operatives attached to courier companies in Lagos have intercepted 1.2kg of cannabis concealed inside locally made cookies going to Dubai, UAE and 920grams of cocaine hidden inside synthetic hair heading to Saudi Arabia.

Another 1.08kg cannabis concealed in spray cans going to Pakistan and 625grams of methamphetamine hidden in clothing heading to Australia were also seized. 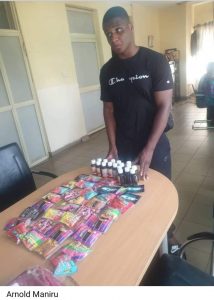 Across the states, operatives also intensified arrests of traffickers and seizures of illicit drugs.

A total of 384.7 kilograms of assorted narcotics being transported to the nation’s capital, Abuja for sale were intercepted and seized at patrol points in Lokoja, Kogi state on Monday 30th August and Thursday 2nd September 2021.

A truck with registration number Plateau AA 462 QAP, driven by a 50-year-old Danlami Dodo, coming from Onitsha, Anambra, with Abuja, FCT as the destination, was intercepted at a patrol point in Lokoja. 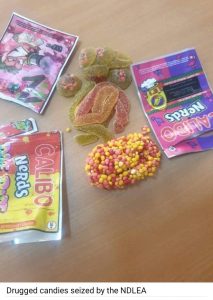 Also on Thursday, a Toyota Hiace bus with registration number Lagos MUS 716 XK, coming from Ojota, Lagos to Abuja was stopped and searched at the Lokoja patrol point, where 6kg of Arizona was found sealed in cartons and stuffed in a white sack.

In Rivers state, one Obey James was arrested during a raid with 4.2grams of heroin; 1.9grams of cocaine and 5.4grams of methamphetamine while in Niger state, two suspects; Eze John and Michael Ifediegwu were arrested along Zungeru-Tegina road with 18kg of Exol 5; 2kg of Tramadol and 1000 ampoules of pentazocine injection, all going to Kontagora in the state.

In Kano, a drug dealer, Chiduzie Ibegbunam, was arrested with 16.8grams of cocaine and 0.6grams of heroin while 158,000 monetary exhibits were recovered from him when his joint was raided.

In Nasarawa state, 22 suspects were arrested and 43.9kilograms of illicit drugs were seized when operatives stormed notorious drug joints in Gadabuke forest, Toto LGA and Down base/timber shed both in Nasarawa LGA, dismantled and set ablaze their makeshift homes.

In Borno state, Caleb Okezuonu was arrested with 352 bottles of Codeine Syrup and 876 tablets of Rohypnol during a raid.

Curiously, Caleb is on court bail, for two earlier charges filed against him by the state command of the NDLEA. 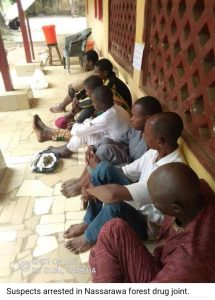 The latest arrest makes it his third arrest for drug offences. During the raid, 11.5grams of Tramadol and N307, 255 monetary exhibits were recovered from another suspect who escaped and has been declared wanted.

In Ebonyi state, military personnel, Anayo Nwamban, who bought 1.1kg of cannabis from Mami market, planted same in his elder brother’s house and then made a report to the NDLEA office intending to implicate his brother, was arrested on Friday 3rd September.

After the arrest of his supplier, he admitted purchasing and planting the same in his own brother’s house.

Reacting to the arrests and seizures in the past week across FCT, Kogi, Rivers, Kano, Niger, Borno, Nasarawa and Ebonyi state commands as well as the Directorate of Operation and General Investigations, NDLEA Chairman, Brig. Gen. Mohamed Buba Marwa (Retd) commended the commanders, officers and men of the commands for keeping the flame burning and maintaining the heat on drug traffickers and dealers.