Taliban-run universities use curtain to separate male and female students 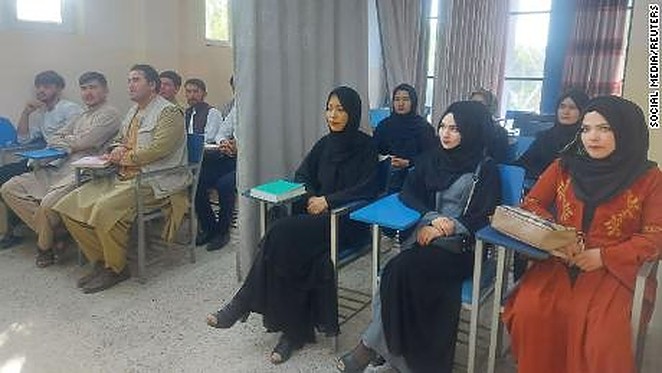 “Putting up curtains is not acceptable,” said Anjila, a 21-year-old Kabul University student who returned to discover her classroom partitioned.

When I first walked into class, I was in such a bad mood… We’re progressively returning to a period of 20 years ago.”

Female students sat separately from male pupils before the Taliban assumed control of the country, according to Anjila, but classrooms were not physically divided.

A grey curtain runs down the center of the classroom in photographs published by Avicenna University in Kabul and widely distributed on social media, with female students wearing long robes and head coverings but their faces visible.

The required wearing of hijabs and separate entrances for female students were among the restrictions specified in a document published by an association of private institutions in Afghanistan outlining criteria for resuming class.

Female teachers should be engaged to teach female students, and females should be taught individually or separated by a curtain in smaller classes, according to the report.

Though it is unclear whether the letter reviewed by Reuters was official Taliban policy, the Taliban announced last week that schools could begin but that boys and ladies should be separated.

A senior Taliban official also stated that classroom barriers such as curtains are “totally okay” and that, due to Afghanistan’s “limited resources and manpower,” it is ideal to “have the same teacher teaching both sides of a class.”

Foreign countries will be watching what occurs in universities and schools across the country for signs of what rights women will have now that the Islamist militant movement has retaken power.

Some Western countries have stated that vital aid and recognition for the Taliban will be contingent on how they run the country, including how they treat women and girls.