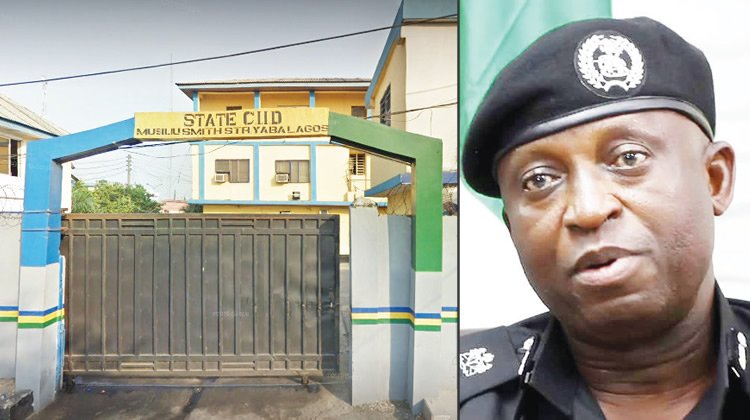 A woman, Jennifer Madueke, has been detained by the Lagos State Police Command over a missing service pistol belonging to the Denton Divisional Police Officer, CSP Adegoke Akinlade.
According to a report by The Punch, the 29-year-old woman, after spending three days in a detention facility at the Denton Police Station, Ebute Meta, Lagos, where she was allegedly tortured to confess to the crime, was transferred to the State Criminal Investigation and Intelligence Department, Yaba.
It was learnt that Madueke and Akinlade once dated and separated after the Police officer was transferred out of Lagos over seven years ago.
A credible source said that after the officer was posted back to Lagos, the lovers did not immediately return to the relationship, having lost each other’s contacts.
The source said that, sometime in 2021, however, they met again and exchanged phone numbers.
“That was when the DPO, who was married, proposed that they continue with the relationship.
“On Friday, August 27, he invited the lady to his office and slept with her till Saturday morning. He released her to go around 5am and even saw her off to the bus stop.

“They did not see each other again until last Saturday, September 4, when he invited the girl and told her they should go out.
“However, when she went to see him, he detained her and accused her of stealing his service pistol. He kept her in his cell till Monday, September 6. While the girl was in the cell, he asked his boys to torture her to make confessional statements.
“On that Monday, he took her to a herbalist on Jebba Street, Ebute Meta, Lagos, around 8am. The herbalist told him that it was the girl that took the pistol, but she denied the allegation. It was from there he took her to the SCIID, Yaba, where she has been detained till now,” the source added.
It was learnt that on Tuesday, September 7, the police at the SCIID took the suspect to her house and ransacked the apartment with the hope of recovering the missing pistol. The effort, however, failed, as nothing was seen.
Another source claimed that the DPO was queried by the state Commissioner of Police, Hakeem Odumosu.
“But, why is the CP leaving him in that position when he should have been removed by now? Is that not injustice?” the source queried.
I never slept with her, she tricked me, says police officer
Akinlade, when contacted by newsmen confirmed losing his pistol, but insisted that it was taken by Madueke, who, he claimed, also stole ₦50,000 from him.
He denied sleeping with her in his office or taking her to any herbalist.
The officer said, “She was my girlfriend in 2011, but we separated. About one and a half months ago, while I was around the Stadium area, she came to greet me and that was how she knew where I was working and she started coming. When her coming did not favour me, I told her not to come again.
“On that Friday, I was at a club with one of my friends. It was there a girlfriend came to meet me. Then this lady came later. I never knew that she had a mission. I sent her away and said I was busy.
“The other lady with me told me that she was going to Bariga. She [Madueke] also came, but said she could not get a vehicle to her residence that night because it was late. I then left them (both ladies) in the office and went out on a night patrol.
“It was then I started thinking I would go back and wake them up. When I returned, I gave her N4,000 (transport fare) to go.”
Asked if he slept with Madueke, he said, “When two people are in my office? I did not sleep with her. I left them there. Unknown to me, she had gone to pick a bag behind my chair. It was when she left that I discovered that my pistol was missing, with ₦50,000. I did not even care about the money, but I started calling her, and she did not pick the calls. She also blocked me on WhatsApp.
“We went to prayer houses and consulted alfas, me and the other girl, but we did not find her. I did not see her for one week. I paid people who tracked her.”
He said he regretted ‘helping’ Madueke that night when she claimed to be stranded, adding that after she was arrested, she denied taking the gun but admitted to ‘stealing’ ₦7,000 from the bag.
The officer said he reported at the SCIID and made statements on the theft in order to get detectives to recover the gun.
“I believe she will still say where the gun is,” he added.
When our correspondent reached out to the Deputy Commissioner of Police in charge of the SCIID, Adegoke Fayoade, on Thursday, he said there was no such matter at the SCIID.
Madueke’s relative, Nnodi, who apologised for missing several calls from our correspondent earlier on Thursday, said he was at the SCIID at the time.
He, however, cut off the call immediately the reporter told him the reason for the call.
When newsmen called back, he changed his tone and warne not to be contacted again.
The state Commissioner of Police, Odumosu, did not take his calls which rang out many times; a text message was also not replied to.
The state Police Public Relations Officer, Adekunle Ajisebutu, promised to get back to our correspondent after making enquiries on the matter. He did not get back as of press time.
Our correspondent learnt from a close associate of Madueke that she was ill and abandoned at the SCIID.
(The Punch)