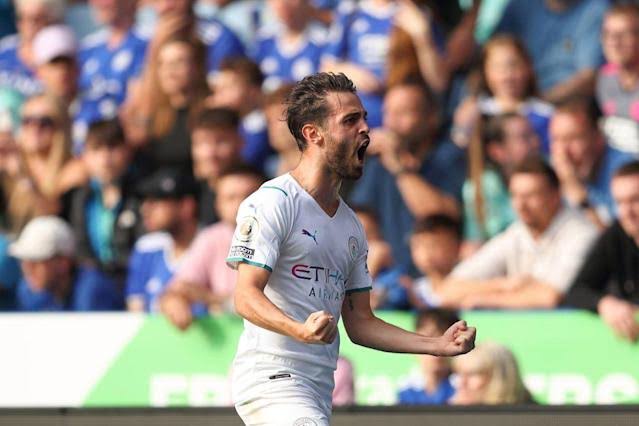 Leicester City were edged 1-0 by Manchester City at the end of a frenetic Premier League encounter at King Power Stadium on Saturday.

For his 250th match as a Premier League manager, Brendan Rodgers handed maiden Foxes starts in the top flight to Ryan Bertrand and Jannik Vestergaard on Filbert Way, while Timothy Castagne also came in at right-back for the home side after the international break.

Leicester were looking to secure back-to-back home wins to start a top tier season for the first time since 1966. The visiting Premier League champions, though, enjoyed long spells of possession during the early moments and they tested Kasper Schmeichel for the first time in the sixth minute.

A powerful, point-blank header was expertly pushed away by the Denmark No.1, before international team-mate Vestergaard frantically blocked drives from Bernardo Silva and then İlkay Gündoğan inside the 18-yard box to keep Pep Guardiola’s men at bay.

Almost immediately, Leicester broke. Jamie Vardy, a frequent menace for Man City over the years, drove forwards, eventually locating Harvey Barnes’ gallop into the area. The Foxes No.7 shifted gear and accelerated, before seeing his strike saved by Ederson.

James Maddison, though, was alert to the loose ball, rolling it back to Wilfred Ndidi, but the Nigerian’s first-time effort was deflected behind. Less than 10 minutes in, both sides had carved out significant opportunities, but the deadlock remained intact.

While Vestergaard nodded the resulting corner over, Bertrand’s block denied Gündoğan’s volley at the other end, before Schmeichel tipped a low drive from Silva around the post. Ferran Torres was frustrated by the Foxes shot-stopper on 28 minutes, too, after spinning on the spot and firing from close range.

A match which, for the best part of half-an-hour had raced by, suddenly calmed for a 10-minute spell, before ending with a flurry of chances for both sides. First, Vestergaard dived into an inch-perfect challenge to take the ball away from Torres.

Youri Tielemans had to be alert also to get in the way of Gündogan’s follow-up. In a separate phase of play, Jack Grealish’s cross landed to Gabriel Jesus, who chested the ball down and unleashed a fearsome drive at goal. However, Schmeichel was on hand to make another fine stop.

Vardy broke free of the Man City backline, too, but misjudged the pace of the ball, allowing it to roll to Ederson, as both sides went in at the interval in stalemate. It was the Foxes who started brightest, though, with Barnes rattling the woodwork and Vardy having a goal disallowed in just five minutes.

Firstly, Castagne’s neat flick afforded Vardy with the room he needed to commute the ball forwards and he picked out a perfect cross for Barnes, whose header skimmed the top of Ederson’s bar. Moments later, Ndidi fed Vardy, slipping a ball through the backline, and Leicester’s No.9 did the rest.

He danced round the Man City ‘keeper and finished it into an empty net, but the flag – eventually – went up. Çağlar Söyüncü, on the other hand, would later make an outstanding challenge to thwart Torres, who also fired wide shortly afterwards, before Gündoğan’s header floated over the crossbar.

On the hour mark, Jonny Evans returned to action in a Leicester City shirt, after last featuring in the final of the Emirates FA Cup last term, replacing Vestergaard. Moments later, the visitors took the lead as Silva pounced on a loose ball to convert past Schmeichel from a tight angle.

Ademola Lookman was later handed a debut from the bench, in a double change which also saw the introduction of Kelechi Iheanacho – the scorer of a brace for Nigeria over the past week. Maddison and Barnes were the two Foxes to make way. It was nearly a dream start for Lookman, too.

Albrighton did exceedingly well to play a ball through to Iheanacho, who had to demonstrate his strength to earn the space he needed to slot a pass into Lookman’s path. The RB Leipzig loanee raced onto it and, with his first touch, tried to find the bottom corner. Ederson, though, was able to save it.

When Tielemans threaded the eye of a needle to find Lookman in space, the former Everton winger hit it, forcing Rúben Dias into a brave block. Second-half substitute Fernandinho and Grealish both had opportunities in added time, before the full-time whistle confirmed a narrow Man City success.