Why we remain focused on improving human capital devt – Osinbajo 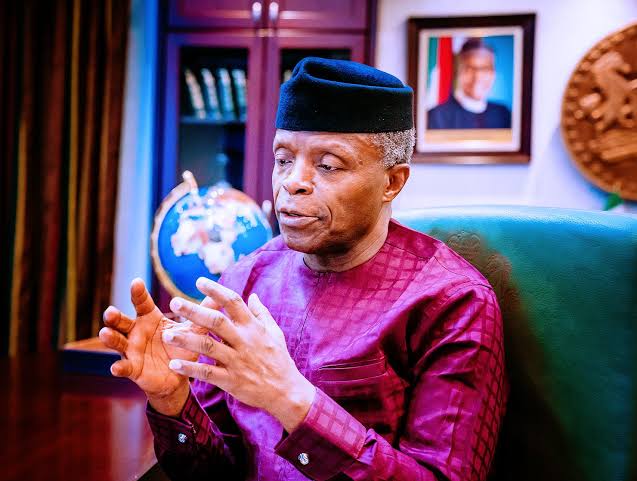 The Buhari administration alongside state governments will continue to ramp up its efforts towards improving the country’s Human Capital Development in Nigeria ensuring quality access to education, and health services for all Nigerians, according to Vice President Yemi Osinbajo.

Osinbajo stated this on Tuesday at the Human Capital Development (HCD) Strategy Validation Event, which held at the State House Banquet Hall, Abuja.

The Deputy Chief of Staff (DCOS) to the President, Office of the Vice President, Mr. Ade Ipaye, delivered the VP’s speech at the event, which also had in attendance Governor Nasir El-Rufai of Kaduna State; the Deputy Governor of Katsina State, Mannir Yakubu; the Minister of State for Education, Chukwuemeka Nwajiuba; representative of the Minister of State for Budget and National Planning, state commissioners; and other senior government officials and development partners.

Nigeria’s HCD programme was launched in March 2018 by the National Economic Council (NEC), which is chaired by the Vice President. The NEC conceptualized the HCD programme with the realization that human capital development plays a critical role in addressing poverty and ensures participatory and sustainable economic growth. The programme is also designed to increase investments in the Nigerian people and improve the country’s human development indices.

The goal of the National HCD Vision – which was launched at an extended meeting of NEC focused on the Human Capital Development in December 2018 – is for “Healthy, Educated and Productive Nigerians by the Year 2030”, with targets across three thematic areas; namely Health and Nutrition, Education and Labour Force Participation.

The Vice President commended the HCD Core Working Group (CWG), set up by NEC for its work so far “towards the development of Human Capital in Nigeria, and the diligent attention to all the details required to progress the course of Human Capital Development in the country.”

The CWG was established with a mandate to develop a National Human Capital Development Strategy, engage States to ensure prioritization of HCD, ascertain quick wins at the Federal and State Levels, and institute a robust countrywide Monitoring and Evaluation Framework to track progress.

Noting that stakeholders, including the ministers of health, education and others, have been making significant contributions towards moving HCD forward in the country, the VP added that, “we cannot do this quietly all the time, even though many of us wish we could. People have to know what we are doing; stakeholders have to be carried along, and the effects have to be so visible and to be publicized such that others would be fired up to join the efforts which we are making towards improving Human Capital Development in Nigeria. Hence, this communication strategy.”

He added, “we want to ensure that everybody has a shared understanding of the HCD objectives and its importance to Nigeria. Those of us here, right from the governors, ministers and state commissioners, directors and focal persons; we are the critical people to make sure that we first understand the programme, and we follow up on its implementation at all levels of government so that we can really begin to see the effects.”

“It is not enough to make all these grand plans and to even try to implement them, we must let the ripples spread; we must get other people to know what’s happening, to know that these are the benefits for our people in making this happen, and get them to come along with us to make it happen.

“Therefore, we need a strong and positive brand identity for the programme, which will inspire others to join in its objectives and implementation. Then, we need to streamline the HCD communications activities to people at the areas of most impact, those that should know should know, those that would benefit should also be aware of what entitlements that they should rightly expect.”

“If we don’t invest in education, health care, nutrition and skills, our situation would get worse. This is why I must pay compliments to His Excellency, the Vice President, for being at the lead to getting the political attention needed to address this challenge, because it’s all about political will. We’ve spoken here, there is a clear strategy, now we talk about implementation,” Governor El-Rufai noted.

In the same vein, the VP also thanked Governor El-Rufai for his efforts in spearheading the initiative, adding that, “it is no wonder then that he is personally here with us this morning. He is someone that believes in the course, both in theory and practice of it, and we see it in motion in Kaduna State.”

The representative of the VP and Governor Rufai led other dignitaries at the event to unveil the logo of the Human Capital Development campaign.

The objective of the HCD Strategy Validation Meeting was to validate the outcomes of the HCD Communications Strategy event, present the HCD Brand Identity and launch the HCD website.