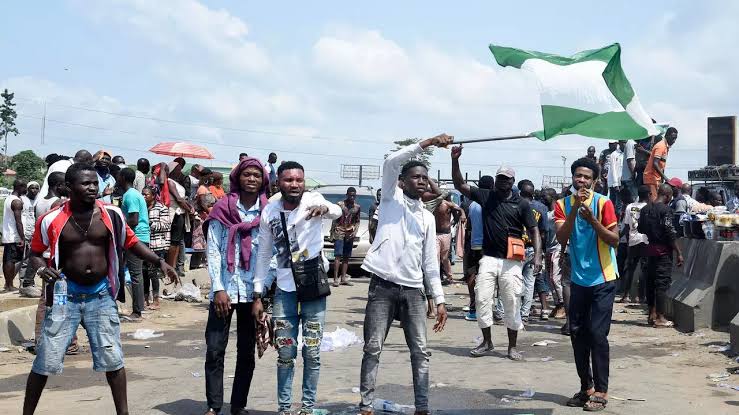 Protesters under the banner of #TakeItBack Movement and #RevolutionNow on Friday stormed various streets areas in Lagos and Ogun state.

The protesters registered their displeasure against insecurity, poor economy, lawlessness, and other challenges in the country.

They also protested against the detention of the leader of Independent People of Biafra, Nnamdi Kanu and Yoruba Nation agitator, Sunday Adeyemo popularly known as Sunday Igboho.

The protests coincide with the nation’s 61st Independence Anniversary.

According to reports, the police during the week claimed that no official letter had been received to notify the command of any protest, adding that it ought to be notified so security could be provided to prevent miscreants from taking advantage of the

It was gathered that at Ojota, protesters at the scene chanted and displayed banners and placards that read, ‘Buhari Must Go’.

According to the Nation, they sighted security operatives including RRS officers, over 10 Hilux vehicles of the Nigeria Police Force at the venue of the protest.

Security operatives were also stationed around the Maryland axis to forestall any breakdown of order.

Festus Ogun, a constitutional lawyer and human rights activist, spoke to Nation on the protest. He said, “Nigerians are still in bondage, there is bad governance, unemployment, poverty and anger in the land.

“This is a reflection of how bad we’ve been treated. What we are agitating for today is an end to bad governance and insecurity and the betterment in the situation of the country