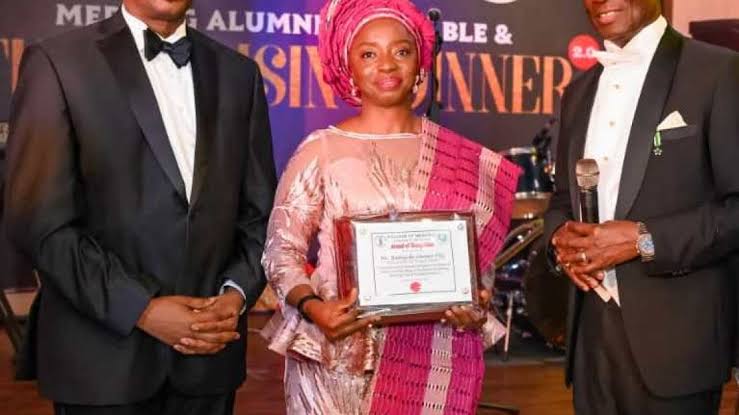 Lagos State First Lady, Dr. Ibijoke Sanwo-Olu. on Thursday evening bagged a special recognition award in appreciation of her advocacy and tremendous support to enhance the fight against Sexual and Gender-Based Violence (SGBV) in the state.

The recognition award was presented to the First Lady by the State Governor, Mr Babajide Sanwo-Olu, who was represented by the Head of Service, Mr Hakeem Muri-Okunola at the annual Commendation & Awards Night organized by the Lagos State Domestic and Sexual Violence Response Team (DSVRT) to commemorate the Domestic & Sexual Violence Awareness Month.

The First Lady, according to a statement by Assistant Director, Public Affairs, Office of the First Lady, Mrs Olubukonla Nwonah, bagged the award in view of her various initiatives to confront the menace of rape, defilement, abuse and others through a multi-sectoral stakeholders’ committee which she is leading, and the recent presentation of three utility vehicles to critical agencies fighting SGBV crimes in the state.

In his address, Governor Sanwo-Olu reiterated the zero tolerance stance of the state government for SGBV, saying his administration was working not only to curb domestic and sexual violence, but also to ultimately eliminate it.

“In the past two years, we have made significant gains in our war against Domestic and Sexual Violence. Institutions have been strengthened to respond appropriately, policies have been formulated and introduced in ensuring we provide holistic care and support to survivors, and we are also gradually ending the culture of impunity as evidenced in the convictions secured by the Ministry of Justice. In simple terms, we are indeed walking the talk.

READ ALSO: Nigeria at 61: We must not lose hope – Sanwo-Olu

“The Lagos State Domestic and Sexual Violence Response Team has also leveraged on technology through the introduction of the Gender Based Violence Virtual and Referral System which provides uninterrupted access to GBV services. This enables survivors to have access to trained GBV service providers 24/7 through the established toll-free help line (0 8000 333 333).

“In the few months since its launch, the virtual system has provided legal, psycho-social, referral, as well as emergency services to 841 adults and 105 children; a total of 946 cases. This initiative is supported by the Joint European Union Funded Spotlight Initiative, with technical support from UNFPA,” the Governor said.

He added that in view of the public health implications as a result of the aftermath of Sexual Violence, the State Government through the Lagos State Health Insurance Scheme has recently launched an Intervention Fund which now ensures survivors of sexual violence are able to access immediate medical attention at all Primary health Centers, General Hospitals and designated private hospitals at no cost.

Besides, Sanwo-Olu said the government has also intensified advocacy efforts in ensuring residents become better informed of support services available, especially through creative use of social media and also community engagements which have taken place across the metropolis.

On her part, the First Lady commended all the award recipients for working assiduously to support the fight against Sexual and Gender-Based Violence in the state, saying that the recognition should strengthen their individual and collective resolve to do more to stamp out the menace in the society.

“We have all done well; however, we can and we need to do more to scale up the fight against SGBV. Therefore, the recognition awards should serve as a motivation to spur us all to continue to do our best and key into the vision of zero tolerance for all forms of SGBV crimes in Lagos State,” she said.

Aside from the First Lady, other award recipients who were selected from multi-level sectors include the Police, social welfare officers, Non-Governmental Organizations (NGOs), mandated reporters, health facilities, development partner organizations and the Mirabel Centre.