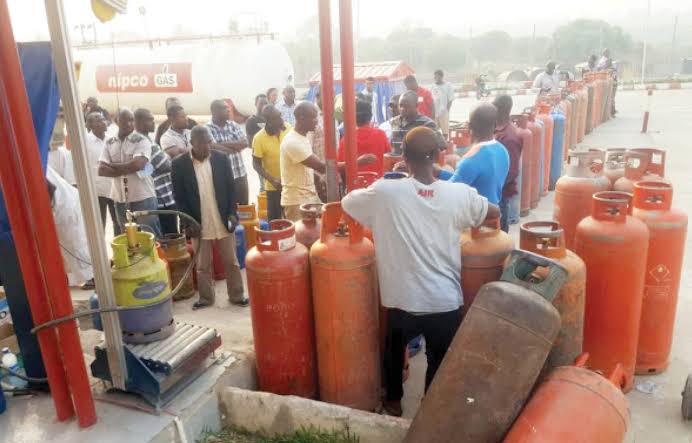 Residents of Ado Ekiti, on Friday, decried the recent hike in the price of cooking gas, saying that government should address the development.

A resident, Segun Adekunle, told the News Agency of Nigeria that the hike in the price of cooking gas was quite alarming, especially given the fact that no reasons had been adduced for the increase.

He questioned how the price could have move from N3,000 to N7,000 for a 12.5kg cylinder within the spate of a few months, saying that the development had compounded the hardship in Ado Ekiti, as he has now resolved to use firewood and charcoal for cooking.

”Cooking with firewood is dangerous to health,” he, however, complained.

Another resident, Bunmi Ajisafe, a trader, expressed worry over the continuous increase in the price of cooking gas, noting that the hike had further worsened the economy of her family.

Ajisafe said she was surprised at the astronomical increase in the price of commodities these days, not only gas.

”It is so frustrating that you are not sure of the next price you would meet when you go to the market. I am really worried and surprised. I thought Nigeria was a country with abundance of gas,” she said.

She appealed to the Federal Government to urgently intervene, otherwise, she said, she might return to the use of kerosene stove, charcoal or firewood.

A civil servant, Tope Ogunfowokan, said that Nigerians were yet to recover from the hardship of COVID-19, which crippled many businesses and rendered many people jobless.

Ogunfowokan said that she remembered there was a time the Federal Government was campaigning for citizens to key into cooking with gas.

”And most people did nothing to that effect, but people gradually keyed into it, then comes the present gas situation; it is frustrating and unimaginable and government should intervene,” she said.

A gas dealer, Michael Ogunsakin, said that he didn’t have to talk much, but that the whole hike simply had to do with the government