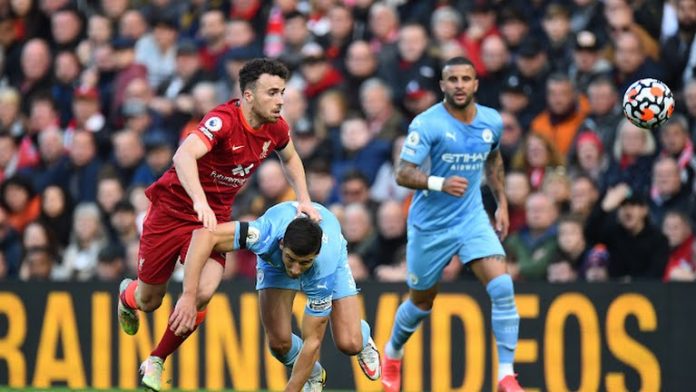 Manchester City came from behind twice to earn a 2-2 draw in an exciting matchup at Anfield on Sunday evening.

Sadio Mané fired Liverpool ahead when he got on to the receiving end of Mohamed Salah’s through ball to tuck the ball into the bottom corner after a blistering counter-attack from the hosts.

Phil Foden then equalised for Pep Guardiola’s side, drilling home after being found free at the back post after some good work from Gabriel Jesus.

Salah restored the lead for Jürgen Klopp’s side with a stunning individual effort, waltzing past two City defenders before poking home with a right-footed shot from a tight angle.

But that lead lasted just five minutes with Kevin De Bruyne’s curled effort from the edge of the area deflecting off Joël Matip on the way into the back of the net to pull Pep Guardiola’s men level yet again.

Liverpool go into the international break in second place, a point behind leaders Chelsea while the visitors lie a point back in third.