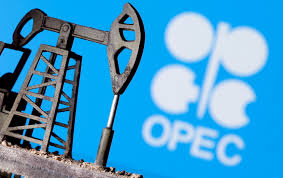 In its 2021 report on the latest values of petroleum exports and imports of member nations of the Organisation of Petroleum Exporting Countries obtained in Abuja on Friday, OPEC stated that Nigeria exported $27.73bn worth of petroleum products in 2020.

Although Nigeria is a major producer of crude oil and gas, the country largely depends on imported petroleum products that are refined in foreign nations.

This is because Nigeria’s refineries have remained dormant for several years, despite repeated turn around maintenance which were done by successive governments on the facilities.

The report stated that figures obtained from the Nigerian Nigerian National Petroleum Corporation showed that the N2.39tn crude oil was processed during a 13-month period.

It stated that foreign refiners processed 145.86 million barrels of oil for Nigeria between March 2020 and March 2021, as this was due to the non-functional state of Nigeria’s refineries located in Warri, Port Harcourt and Kaduna.

The OPEC figures therefore showed that the country had been spending more billions of dollars to import petroleum products than the amount of foreign exchange being earned from crude oil sales.

On several occasions, the Federal Government had vowed to ensure that Nigeria refined its crude for domestic consumption in order to save foreign exchange.

In December last year, for instance, the government said it would leverage the opportunities provided by the African Continental Free Trade Area Agreement to reposition the oil and gas sector.

It said this action would transform the country into a petroleum products refining hub for the African region with its attendant socio-economic benefits.

The Minister of State for Petroleum Resources, Chief Timipre Sylva, had disclosed this at the AfCFTA Oil and Gas Virtual Workshop, organised in collaboration with the Federal Ministry of Industry, Trade and Investment.

Sylva, who was represented by his ministry’s Permanent Secretary, Bitrus Nabasu, had said, “Nigeria is willing to leverage on AfCFTA to reposition its oil and gas sector for its next phase of growth.

“This is in line with the achievement of the vision of our national petroleum policy and national gas policy.”

Sylva said the government had begun rehabilitating the country’s refineries, using a public-private partnership strategy, adding that the refineries would have a 90 per cent combined production capacity by 2023