Pandora Papers: What has been uncovered?

The Pandora Papers is a leak of almost 12 million documents that reveals hidden wealth, tax avoidance and, in some cases, money laundering by some of the world’s rich and powerful.

More than 600 journalists in 117 countries have been trawling through the files from 14 sources for months, finding stories that are being published this week.

The data was obtained by the International Consortium of Investigative Journalists (ICIJ) in Washington DC, which has been working with more than 140 media organisations on its biggest ever global investigation.

BBC Panorama and the Guardian have led the investigation in the UK.

What has been uncovered?

Stories revealed so far include:

The files expose how some of the most powerful people in the world – including more than 330 politicians from 90 countries – use secret offshore companies to hide their wealth.

Lakshmi Kumar from US think-tank Global Financial Integrity explained that these people “are able to funnel and siphon money away and hide it,” often through the use of anonymous companies. 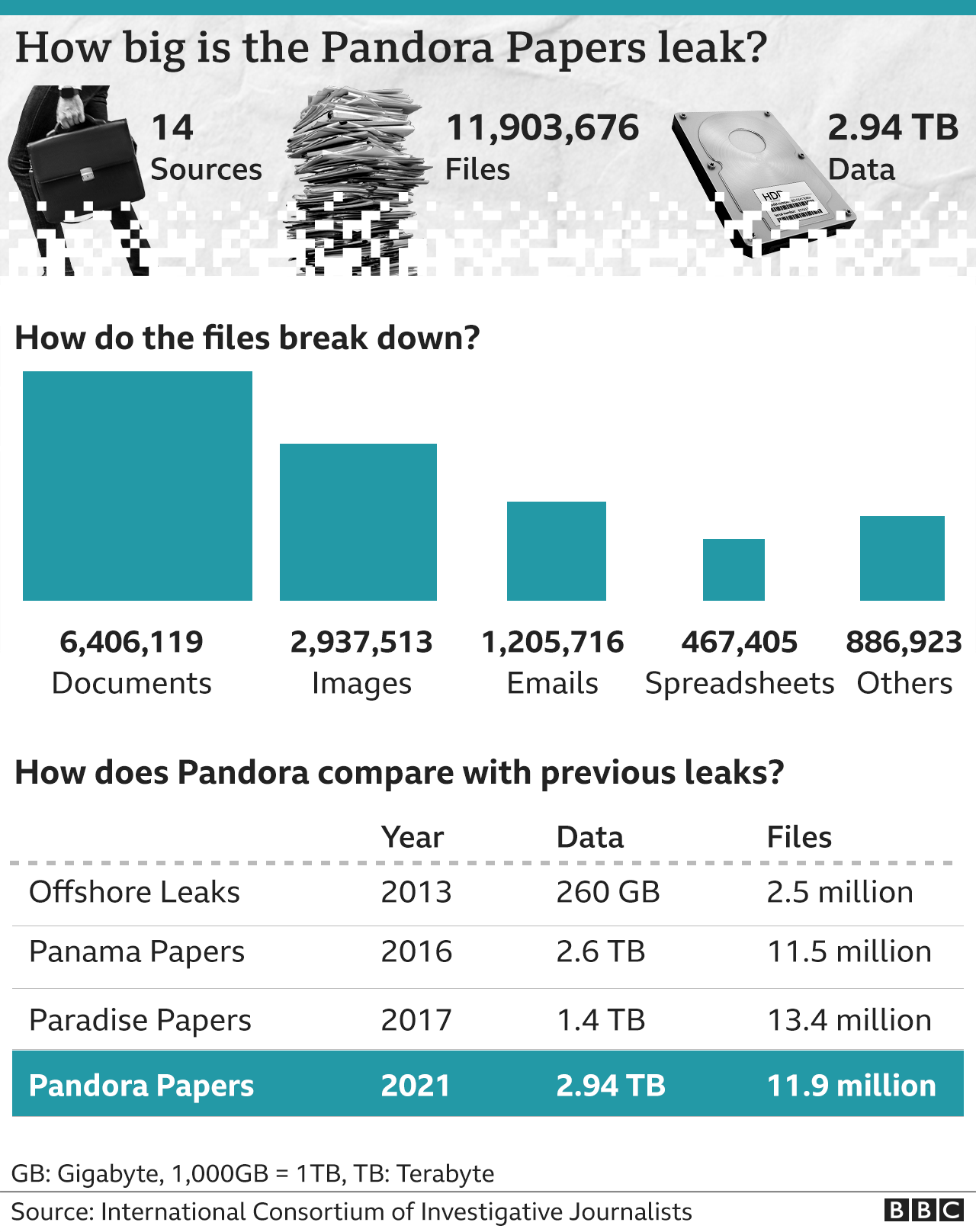 What do we mean by ‘offshore’?

The Pandora Papers reveal complex networks of companies that are set up across borders, often resulting in hidden ownership of money and assets.

For example, someone may have a property in the UK, but own it via a chain of companies based in other countries, or “offshore”.

These offshore countries or territories are where:

The destinations are often called tax havens or secrecy jurisdictions. There is no definitive list of tax havens, but the most well known destinations include British Overseas Territories such as the Cayman Islands and the British Virgin Islands, as well as countries such as Switzerland and Singapore.

Is it illegal to use a tax haven?

Loopholes in the law allow people to legally avoid paying some taxes by moving their money or setting up companies in tax havens, but it is often seen as unethical. The UK government says tax avoidance “involves operating within the letter, but not the spirit, of the law”.

There are also a number of legitimate reasons people may want to hold money and assets in different countries, such as protection from criminal attacks or guarding against unstable governments.

Although having secretive offshore assets is not illegal, using a complex network of secret companies to move around money and assets is the perfect way to hide the proceeds of criminality.

There have been repeated calls for politicians to make it harder to avoid tax or hide assets, particularly following previous leaks such as the Panama Papers.

But Mr Ryle said the Pandora Papers show that “the people that could end the secrecy offshore… are themselves benefiting from it. So there’s no incentive for them to end it”.

How easy is it to hide money offshore?

All you need to do is set up a shell company in one of the countries or jurisdictions with high levels of secrecy. This is a company that exists in name only, with no staff or office.

It costs money though. Specialist firms are paid to set up and run shell companies on your behalf. These firms can provide an address and names of paid directors, therefore leaving no trail of who is ultimately behind the business.

How much money is hidden offshore?

It is impossible to say for sure, but estimates have ranged from $5.6 trillion to $32 trillion, according to the ICIJ. The International Monetary Fund has said the use of tax havens costs governments worldwide up to $600bn in lost taxes each year.

Ms Kumar said it is detrimental to the rest of society: “The ability to hide money has a direct impact on your life… it affects your child’s access to education, access to health, access to a home.”

What is the UK doing about it?

The UK has been criticised for allowing property to be owned by anonymous companies overseas.

The government published draft legislation in 2018 that would require the ultimate owners of UK properties to be declared. But it is still waiting to be presented to MPs.

A 2019 parliamentary report said the UK system attracts people “such as money launderers, who may wish to use property to conceal illicit funds”.

The government recently raised the risk of money laundering through property from “medium” to “high”.

It says it’s cracking down on money laundering with tougher laws and enforcement, and that it will introduce a register of offshore companies owning UK property when parliamentary time allows.