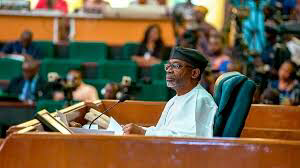 A motion seeking intervention and possible release of four persons reportedly arrested by the Nigeria Police during the country’s Independence Day anniversary on October 1 has been dramatically rejected by members of the House of Representatives.

Minority Leader of the House, Ndudi Elumelu, had in the motion prayed that the Committee on Police Affairs be mandated “to investigate the allegation of the arrests and interface with the leadership of the Nigerian Police Force for the immediate release of the four arrested innocent protesters” arrested in Abuja on the said date”.

But after Elumelu presented the motion which he titled, ‘Illegal Arrest, Detention and Brutalisation of Peaceful Protesters’, Deputy Speaker Idris Wase punctured his submissions, arguing that protesters could not be said to be “peaceful when they go about obstructing other people who are going about their lawful business”.

“You cannot say you are carrying out a peaceful protest when you are burning tyres on the road and obstructing people and say it is human rights. You can do your protest but you cannot obstruct other Nigerians”, Wase said, adding that the issue of rights should not be used to prevent the police from carrying out their duties, especially at a time when people were taking up arms and burning down police stations.

However, the Deputy Minority Leader, Toby Okechukwu, insisted that all Elumelu was asking for was for the alleged illegal arrest to be investigated, and anyone found culpable to be prosecuted.

“Our laws guarantee due process in policing. I don’t think we can equate a simple protest with people carrying arms”, he said, adding that the persons should be given a fair hearing.

Speaker Femi Gbajabiamila also pointed out as worrisome, where Elumelu in the motion stated that “a detachment of armed anti-riot policemen led by ASP Altine Daniel arrived at Dantata Bridge and violently opened fire on the peaceful protesters to disperse them” when he was not aware of any reported death during the incident.

The Speaker had to repeat the question for members’ voice votes three times before he finally gave it to the nays.