PDP begins sale of nomination forms ahead of national convention 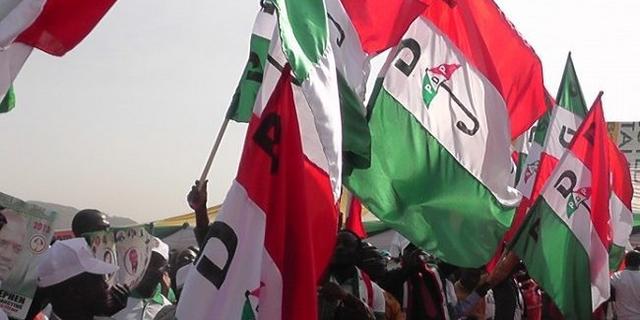 The Peoples Democratic Party says it will begin the sale of nomination and expression of interest forms on Monday.

This is coming ahead of its National Elective Convention scheduled for October 30-31.

The party disclosed this in its revised ‘Timetable and Schedule of Activities for Year 2021 National Convention,’ signed by its National Organising Secretary, Col Austin Akobundu (retd), on Sunday in Abuja.

Akobundu said that the timetable was approved by the National Working Committee in line with the resolution of the 94th National Executive Committee of the party that adopted the zoning formula.

According to the timetable, the sale of nomination forms and expression of interest forms for the national offices will start from Monday, October 11 to Friday, October 15 at the party’s National Secretariat, Abuja.

The timetable also slated the last day for the submission of purchased forms for Saturday, October 16.

It stated that the forms should be submitted to the party’s Directorate of Organisation and Mobilisation for processing and onward transmission to the screening committee.

The party advised all aspirants for various party offices at the national level to purchase their expression of interest and nomination forms at the National Secretariat.

The Chairman, National Convention Organising Committee, Governor Ahmadu Fintiri of Adamawa State, had earlier on Saturday said that the October 30 for the convention remained sacrosanct.

Fintiri said: “There is no reason for the date to be changed, in spite the fact that the zoning committee just concluded their job and approved by the National Executive Committee on Thursday.”

He said that the venue for the convention is Eagle Square, while delegates’ accreditation would take place at the Old Parade Ground, Area 10, Abuja.

“The transport committee will work with the appropriate transport companies to secure vehicles for members that will be accredited and be conveyed from the old parade old ground to the Eagle square,” Fintiri said.

He disclosed that the committee had received budget submissions from all the sub-committees.

The chairman said that all the submitted lists would be harmonised, approved and funds would be released.

Fintiri said that the electoral committee would be trained to have the best convention that Nigerians have been awaiting.

Asked if the zoning decision would be reviewed, Fintiri said that the NEC, which is the highest decision organ of the party, had already taken the final decision.

“We will abide by it and that is what we are working on,” he said.

On the size of delegates expected at the convention, Fintiri said no fewer than 4,000 to 6,000 would be on the ground.

The Governor of Bauchi State, Sen Bala Mohammed, while fielding questions from newsmen shortly after the meeting, said that the PDP had resolved issues regarding zoning for the convention.

“We have learnt our mistakes, we are not going to play to the gallery the way and manner our distractors or our competitors want us to be.

“We will always resolve our issues, so zoning is over. We have really gone over this issue.

“What we are looking forward to is the emergence of a Chairman from the North, who will give us the leadership that we require to form a government in 2023,” Mohammed said.

On the possibility of consensus candidates for the convention, Mohammed said democracy was about consensus.

He said, “With consensus, electoral process and matters arising within the party thereafter could be reduced.

“I did say we should have a consensus candidate, but we will not practice imposition”.