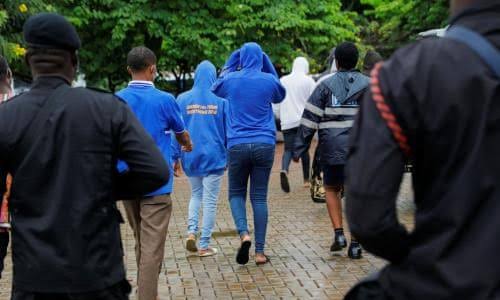 Four men were brutally beaten with sticks and banished for being gay in Tamale, Ghana, capturing the rising tensions – and fears – over an anti-LGBT+ bill.

The men, according to graphic video footage seen by activists, were violently battered by a Choggu community leader as a crowd gathered to watch on Tuesday (19 October).

According to Pulse, a Ghanian news outlet, a gay couple in the town attacked his ex-partner with a machete.

The pair were later interrogated, where the local authorities came to realise the men were gay, the outlet claimed, and named two other gay men involved in the scuffle.

They were then handed to the town’s chief, Naa Alhassan Mohammed, for further “interrogation” by Choggu elders.

But this included the men being thrashed by one of the town’s elders, Rightify Ghana, one of the country’s most outspoken LGBT+ groups which obtained footage of the beating.

“What they have done is desecrating the land and it against the gods,” he said. “May God expose all those in this act.”

‘For just trying to live, these gay men were beaten,’ says Ghana activist group
The four men have since been turned to the Tamale police and charged, with a court date set for 4 November, Rightify Ghana added.

“For just trying to live, exist and thrive, these four gay men were beaten and fined by the people and Chief of Chogu, before turning them over to the Tamale police, and now the police have already sent them to court,” Rightify Ghana said in a statement.

The group added that the chief banished the four men from the town.

For Rightify Ghana, such hostility against queer people has only worsened in recent months as a backbitingly anti-LGBT+ bill is being rammed through parliament by a bloc of homophobic lawmakers and backed by religious leaders.

From those providing or receiving gender-affirming healthcare to those who are an ally, the legislation would threaten countless members and supporters of the LGBT+ community with three to five years in prison.