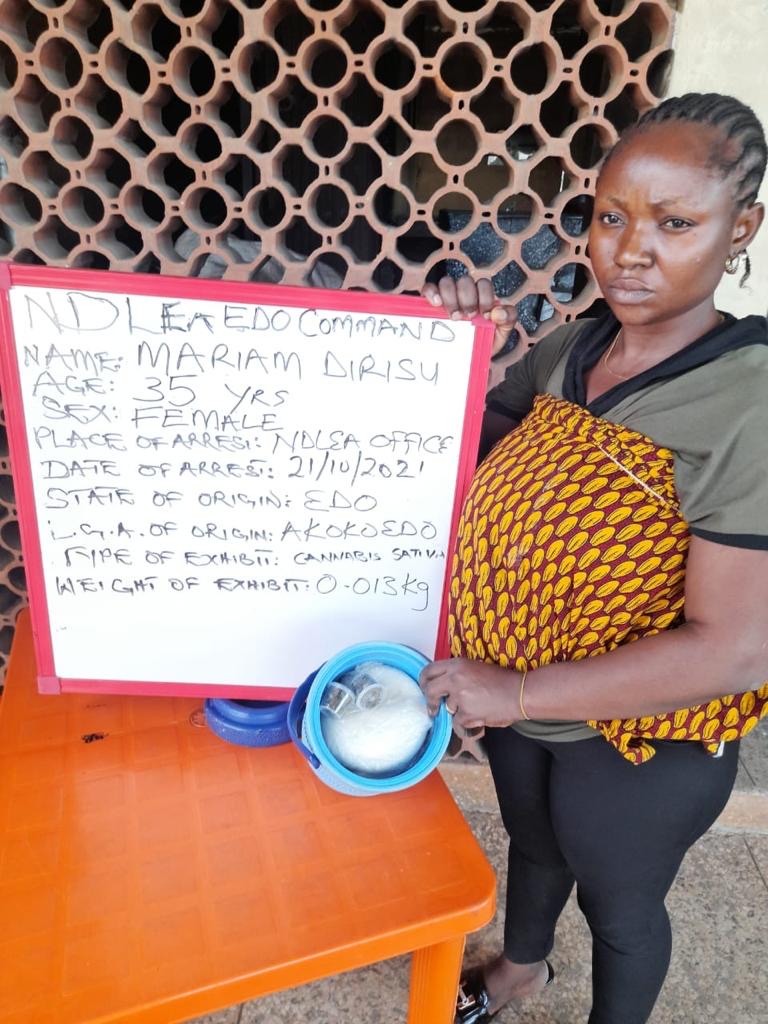 Operatives of the National Drug Law Enforcement Agency have swooped on and arrested several drug pushers around the country.

According to NDLEA’s statement issued by their spokesperson, Femi Babafemi, on Sunday, the Agency intercepted over 2,060 kilograms of assorted drugs including heroin, methamphetamine, cannabis, tramadol and rohypnol in operations at the Murtala Muhammed International Airport, Lagos as well as Ondo, Edo, Kano, Kaduna, Plateau and some courier companies. 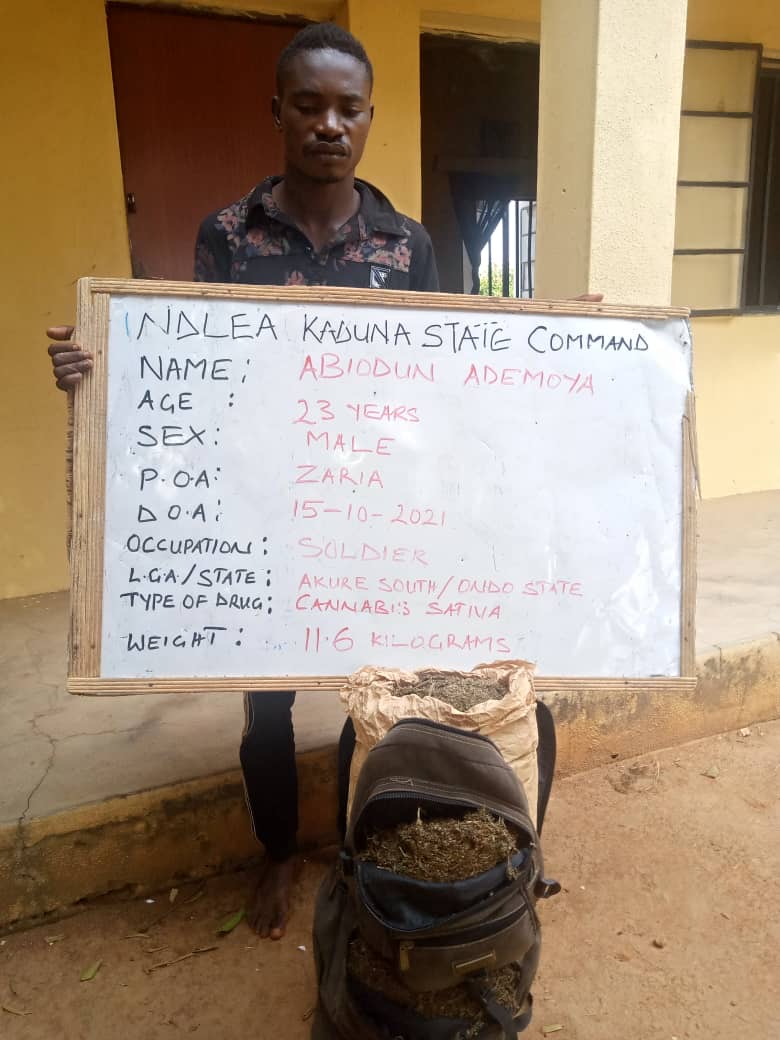 In Edo, a 35-year-old nursing mother, Mariam Drissu was arrested at the Edo state Command headquarters of the Agency on Thursday while trying to smuggle drugs into the cell for a suspect in custody.

Officers on duty had while searching the food brought by Mariam for her relation in custody discovered two cups of “Loud” cannabis weighing 13grams buried inside the food (akpu) meant for the suspect in custody.

In the same vein, officers of the Edo State Command also raided a Cannabis farm measuring 3.210691 hectares, in Ayegunle forest, Akoko Edo area of the state, destroyed the plantation and evacuated 100 bags of harvested cannabis weighing 1,639kg, while a suspect, Samuel Ochonogor was arrested in the forest with 66.7kg of cannabis.

At the airports, two consignments of heroin weighing 4.40kg and 550grams were intercepted on October 6 and 15 respectively at the cargo shed of the MMIA, Ikeja.

The first was seized at the SAHCO import shed of the airport when it was discovered inside bags of granulated sugar and flour from Johannesburg, South Africa via Addis Ababa to Lagos on an Ethiopian Airlines flight.

Two suspects; Chukwuemeka Ugochukwu, a freight agent that cleared the consignment and one Kabiru Aminu, a stock keeper that was to collect the cargo for onward distribution to recipients were arrested for further investigation. 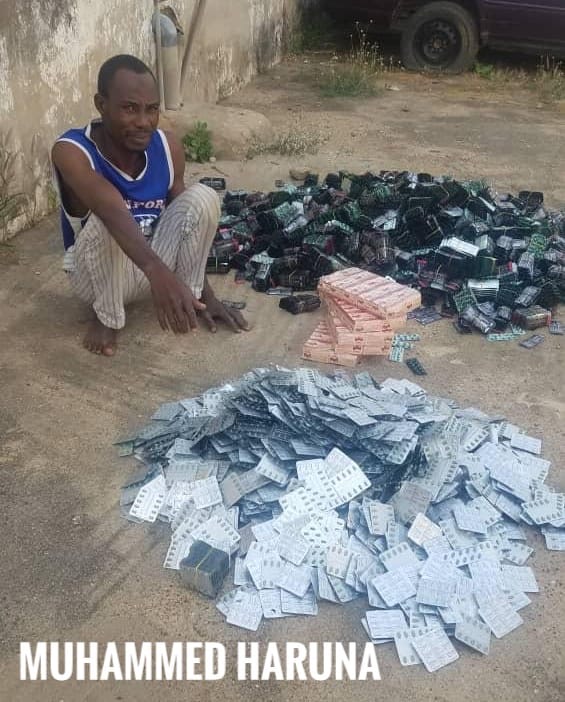 In a follow-up operation on 9th October, one Adeoya Segun Joy who was to collect the luggage from Kabiru Aminu was arrested at Ajao estate, while Enahoro Emmanuel Annointing who was also assigned to collect the consignment was nabbed in the Abuleegba area of Lagos.

Both were acting on instructions from their partners in South Africa.

The second consignment discovered at the SAHCO export shed and concealed in walls of 10 cartons laced with tailoring materials, was heading to Malaysia via Addis Ababa on an Ethiopian cargo airline, while a freight forwarding agent, Ekpe Samson Victor was arrested in connection with the illegal export.

Attempts by another freight agent, Igwe Okoye Onwukwe to export two consignments of cannabis to the United Kingdom have been foiled by NDLEA operatives.

The first attempt was made on October 15, when Onwukwe presented a carton of 16.55kg cannabis for export to the UK at the NAHCO export shed where he was promptly arrested. 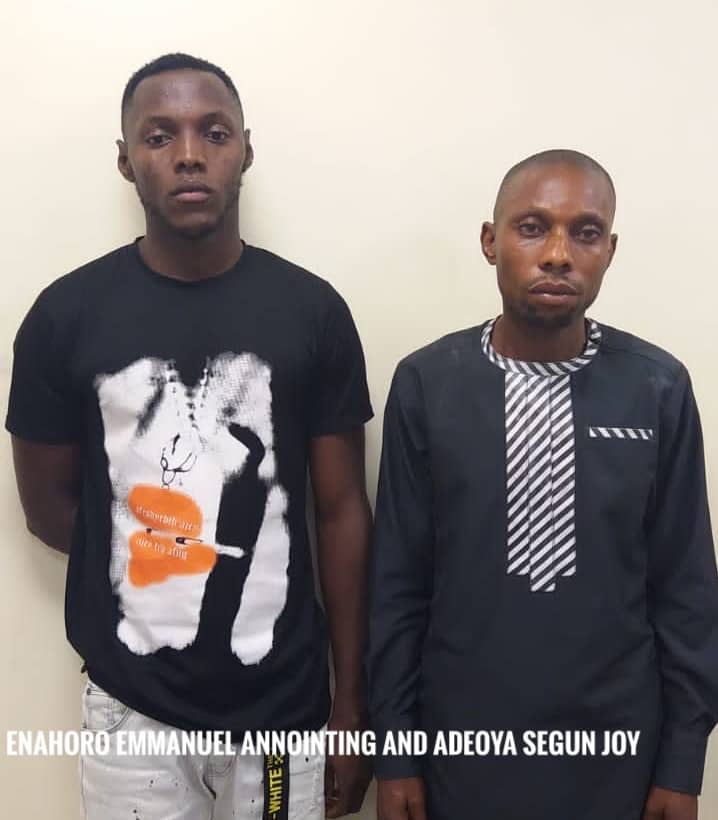 Curiously, another consignment of 15.85kg cannabis also heading to the UK and intercepted on 20th October, was traced to Onwukwe as the owner even while still undergoing investigation in custody.

Also, in Kano, a 45-year-old driver Mohammed Haruna was arrested with 10,161 sachets of Tramadol and Rohypnol tablets and capsules while conveying the illicit drugs in a bus for distribution.

Likewise in Kaduna, another suspected fake soldier, Abiodun Ademoya, from Akure south in Ondo state was arrested in Zaria with 11.6kg of cannabis.

Then in Plateau, operatives intercepted a Yola bound mass transit bus, with registration number FKY 341 ZA belonging to Gombe Express coming from Lagos, along Jos-Abuja Road, within Riyom LGA. One of the passengers, Ahmad Musa Musa, 32, was found in possession of 22 pellets of compressed Cannabis Sativa with a total weight of 15kg concealed inside a black bag.

At some courier companies in Lagos, over 4.5kilograms of methamphetamine concealed in palm fruit tins, artwork, bottles of cashew nuts, auto spare parts, and picture frames going to Australia, New Zealand, Hong Kong, and Qatar were intercepted by operatives of the Directorate of Operation and General Investigations, of the Agency.

Commending the officers and men of the MMIA, Ondo, Edo, Kano, Kaduna and Plateau Commands as well as DOGI, for their resilience and tenacity, Chairman of NDLEA, Brig. Gen. Mohamed Buba Marwa (Retd) urged them and others across the country to continue to keep their eyes on the goal until all the drug cartels in the country are dismantled.