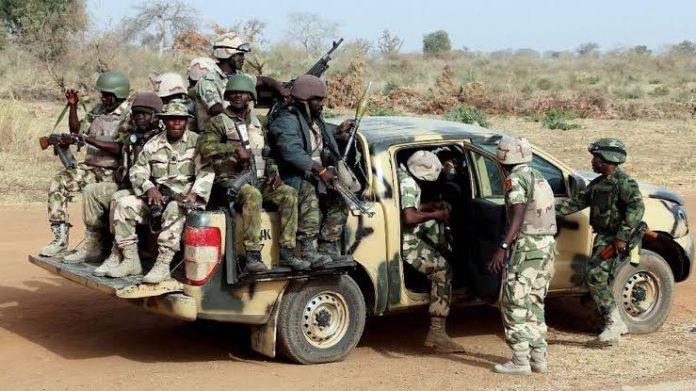 The Nigerian Army has clarified that the deployment of soldiers to the southeast is not a move to occupy the region.

Army’s spokesperson, Brigadier-General Onyema Nwachukwu, disclosed this on Wednesday in a statement on troops’ activities and operational successes recorded in ongoing major Army exercises in parts of the country.

“It is crucial to dispel the unfounded narrative that the ongoing exercises are aimed at military occupation of the South East,” the Army statement read.

“Contrary to this insinuation, the deployment of troops of the Nigerian Army is not only in South East Nigeria but also in the troubled parts of the country, particularly in the North West and North Eastern Nigeria where troops are conducting major operations to tackle more threatening national security challenges.

“As you are aware, on 4 October 2021, the Chief of Army Staff (COAS) Lieutenant General Faruk Yahaya flagged off Exercises STILL WATERS, ENDURING PEACE and GOLDEN DAWN in the South-South, South-West, North-Central and South-East zones respectively.

“On the whole, these Exercises cover 20 states and the FCT.

“Furthermore, these Exercises are traditionally scheduled to hold in the last quarter of the year to checkmate all forms of crimes as the yuletide approaches.

“As it stands today, troops have maintained an offensive posture, conducting several kinetic operations in the forms of raids on criminal hideouts and patrols amongst others.

“So far, all the exercises have recorded significant successes.”

Reeling out some of the successes of the troops in fighting crime and criminals, the Army called on Nigeria to go about their normal businesses with fear.

“The COAS commends troops for the modest successes recorded so far and urges them to sustain the tempo in order to decisively curtail the activities of criminals across the country. Troops are also encouraged to remain professional, vigilant and exhibit utmost respect for Human Right of citizens in their respective Areas of Responsibilities.