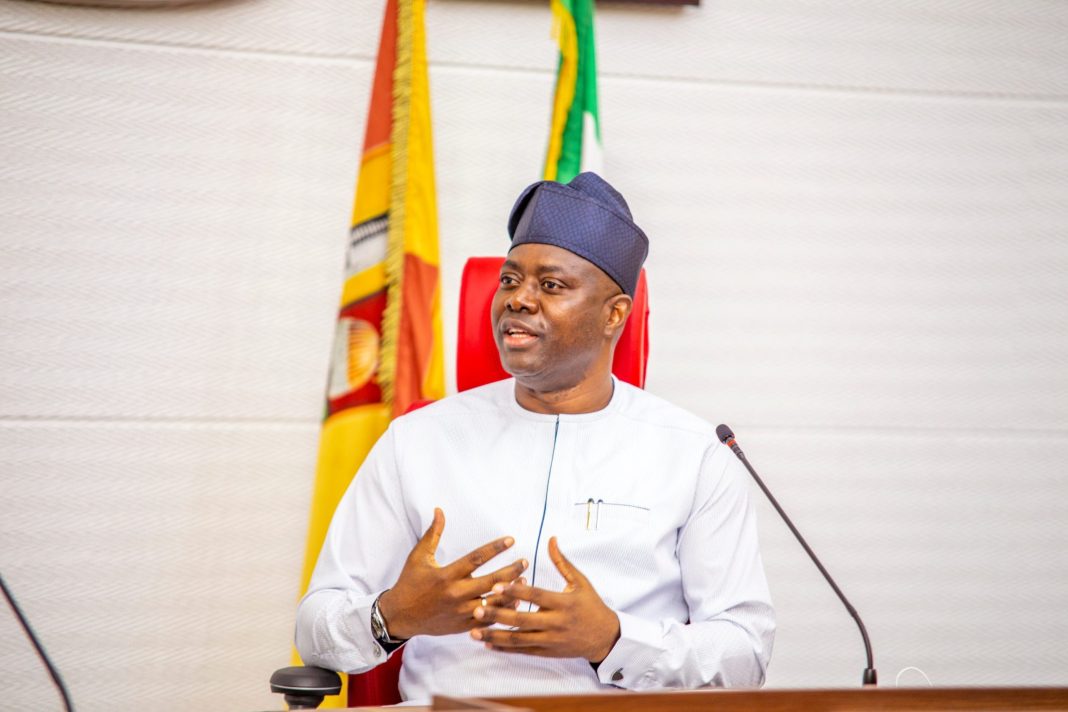 Oyo State Governor, ‘Seyi Makinde, on Friday, stated that his government has been doing everything possible to turn the state into a number one investment destination in Nigeria.
He maintained that the state has been developing its infrastructure so that there would be ease of doing business and transportation in the state, adding that the state is also working hard to improve the security sector in line with its commitment to the four-point service agenda.

A statement by the Chief Press Secretary to the governor, Mr. Taiwo Adisa, indicated that Governor Makinde stated these while receiving a delegation of the French Government led by the French Ambassador to Nigeria, Her Excellency, Mrs. Emanuelle Blatmann, at the Executive Council Chambers of the Governor’s Office, Agodi, Ibadan.

Speaking earlier, the French Ambassador, Blatmann, stated that France had a long-standing relationship with Oyo State, pointing out several partnership efforts ongoing between the two parties in the education, economic and agriculture sectors.

She also informed the governor that the French Treasury would be granting a first-of-its-kind in Nigeria, a Special Treasury Loan of €50 Million for the state to boost its health sector in conjunction with French companies.

In his speech, Governor Makinde, who appreciated the French Government for its interests in Oyo State, said that the state government is leaving no stone unturned to ensure that the state becomes the number one investment destination in the country.

He equally charged France and the international community to pay attention to developments in Nigeria ahead of the 2023 general election and give whatever support they can to Nigeria so that it can deepen its fledgling democracy.

He said: “We want Oyo State to be the number one investment destination in Nigeria and one of the ways we think we are going to do that is to develop our infrastructure so that going around the state, you have easy access.

“That is why three months into the administration, we awarded the 65kms Moniya-Iseyin road, a major link between Ibadan and the food basket of Oyo State. We are also going ahead with other road networks in the state.

“So, we believe that when all of these projects mature and are commissioned, then the ease of doing business and moving around the state will be realised. “Also, your cost of production will greatly reduce and we want you to hold us accountable to that.

“Security is also one of our major pillars and we are working seriously on it. We now have Amotekun in the state and the people of the state cannot imagine life without it. We will continue to pay attention to the security situation in the state. Again, when you have any opportunity to give us feedback, we want to listen to you and make amendments where we are not measuring up. So, please feel free to do that for us.”

Governor Makinde, who stated that the partnership with France has begun to yield positive results for the state’s economic expansion agenda, while also broadening its economic landscape, added that one of the results is the partnership between the state government and France to establish a Farmers’ Market in the state.

He said that the state government, through the Oyo State Agribusiness Development Agency (OYSADA) and the French Government, have been working seriously on having the Farmers’ Market in Oyo State and that he is hopeful that in about a year, another French delegation will have the opportunity to visit the market.

“I am happy to welcome Ambassador Blatmann to Oyo State. When we met in France a few weeks ago, you did promise that you would visit us whenever you come to Nigeria. Today, you have fulfilled the promise. So, I thank you.

“Well, the relationship between this administration and the French Government started just immediately after my election. The immediate past Ambassador of France to Nigeria, Jerome Pasquier, visited me at home before I was even sworn-in and after I was sworn-in, the relationship blossomed. So, it is my expectation that we will continue to work together to deepen the relationship.

“I believe we have started on a very good note. We want to deepen our cooperation with the French Government and our roadmap is pretty straightforward.
“We are focused on four main areas, which are education, security, health and expansion of the economy. Just like the Ambassador mentioned that we have had cooperation over the years between Nigeria and the French Government, especially in Oyo State.

“Of course, we know that we do have challenges with medical tourism in Nigeria to the extent that a few weeks ago, the governor of the Central Bank of Nigeria also cried out and said that Nigerian foreign reserves are being depleted because of medical tourism.
“With this facility from the French government, we believe that Oyo State will definitely be able to bridge the gap nationally as far as medical tourism is concerned. People will be coming to Oyo State once they have confidence in the facilities and also the care they can get from here,” the governor added.

In her speech, the French Ambassador, Mrs. Blatmann, promised to leverage on existing relationship with the state alongside her team members, who gave assurances on investing massively in the state.

Blatmann also commended the current administration in the state for creating an enabling environment for businesses to thrive.

The delegation had over a dozen business interests represented.

The events had in attendance the Chief of Staff to the Governor, Hon. Segun Ogunwuyi; Head of Service, Alhaja Amidat Agboola; some Commissioners; Executive Adviser on Agribusiness, Dr. Debo Akande and the Special Adviser (Interventions) to the governor, Mrs. Aderonke Adedayo, among others.