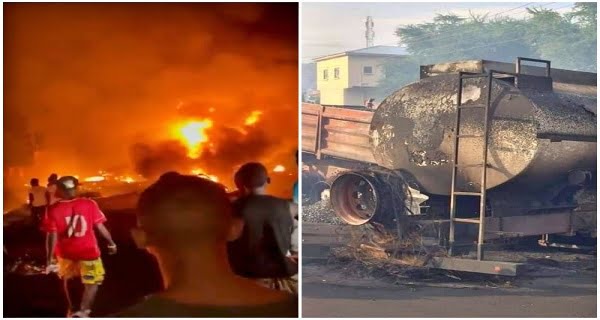 Ninety-one people were killed and over 100 wounded in the capital of Sierra Leone on Friday when a fuel tanker exploded following a collision, the central morgue and local authorities said.

A massive explosion at a petrol station in Freetown, the capital of Sierra Leone, killed scores, burning people in cars and streets nearby. A rescue worker from the Red Cross told AFP that rescue operations were ongoing on Saturday morning.

A nurse at a hospital where the victims were taken said that he had tended to many women, men and children with “serious injuries.”

The explosion took place early on Saturday after a bus struck the tanker in Wellington, a suburb just to the east of Freetown.

Then the oil tanker exploded at the gas station while large crowds had gathered to collect leaking fuel, officials and witnesses said.

Video obtained by The Associated Press showed a giant fireball burning in the night sky following the explosion, as some survivors with severe burns cried out in pain. Charred remains of the victims lay strewn at the scene awaiting transport to mortuaries.

President Julius Maada Bio, who was in Scotland attending the United Nations climate talks on Saturday, deplored the “horrendous loss of life.”

“My profound sympathies with families who have lost loved ones and those who have been maimed as a result,” he tweeted.

“We are all deeply saddened by this national tragedy, and it is indeed a difficult time for our country,” he said on his Facebook page.