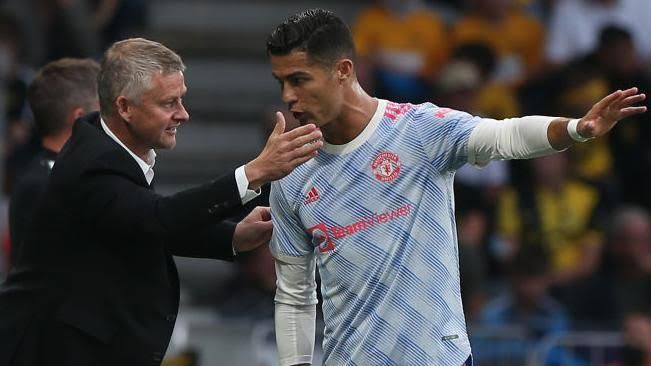 With results against big teams continuing to go against the Red Devils, United are falling further down the Premier League and questions of Ole Gunnar Solskjaer are being asked.

Pep Guardiola’s Citizens ran out 2-0 winners over the Red Devils at Old Trafford with an Eric Bailly own goal and an effort from Bernardo Silva securing the three points.

The fallout from the defeat has been instantaneous, with the suggestion Solskjaer is facing something of a revolt at Man United, with the dressing room disappointed and turning on their boss.

Bruno Fernandes is said to be among the players losing faith in Solskjaer’s methods, according to the Daily Mail.

And there is the claim that the dressing room is unhappy with the way Donny van de Beek is being treated at Old Trafford.

Ronaldo is arguably the biggest personality in the dressing room and there is the feeling that should Solskjaer lose the support of the five-time Ballon d’Or winner then the axe will come down on him.

Recent reports suggest Ronaldo backs Solskjaer to turn things around at Old Trafford and is said to be holding the dressing room together at United.

This puts the five-time Ballon d’Or winner in an awkward position if reports more and more of his teammates are starting to lose faith in Solskjaer after this weekend’s defeat are accurate.

Man United take on Watford next in the Premier League before Villarreal in the Champions League.

Defeat in both of these matches could spell the end for Solskjaer at United.

The Norwegian spoke of his disappointment in the press following United’s latest defeat by Man City, which sees them drop to sixth in the Premier League table.

“It’s very difficult to talk now, of course, because we started the game off badly, passive and when they get the first goal, it was always going to be a difficult game anyway, but being 1-0 down was hard,” Solskjaer said.

“David [De Gea] kept us in the game, some good stops and then they scored a goal they always score. [Joao] Cancelo cuts inside, cross [to the] back-stick that we know that’s going to happen and it shouldn’t happen. It’s disappointing, of course.

“It’s hard to talk at the moment. We play against a good team, don’t forget that, but we were nowhere near what our standards and levels can be and that’s something we have to get back to.

“We’ve got to go back to being on the front foot, be more aggressive, maybe circumstances have made us a little bit more cautious and passive.”