BREAKING: Tight security in Ihala as APGA’s Victor Umeh is blocked by soldiers 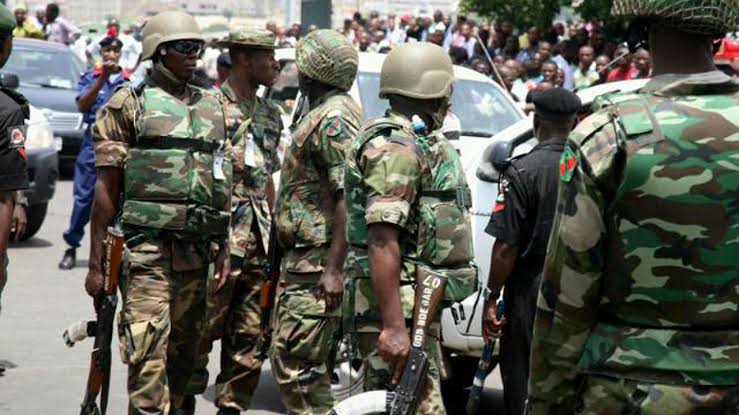 There is currently heavy security in Ihiala Local Government Area of Anambra State where a supplementary election is taking place.

Senator Victor Umeh, agent of the All Progressives Grand Alliance (APGA) in the state, was blocked from Ihiala Local Government Area during the mobilsation of electoral officials.
Accompanied by some of his supporters and aides, Umeh, who spent the night at the INEC head office in Awka, during the collation of results of 20 Local Government Areas, was turned back by soldiers.
A superior officer had told the senator representing Anambra Central at the senate that he could not go in.

All efforts of the ranking politician to state his reason for being there were met with a brick wall from the armed soldiers.
The Independent National Electoral Commission (INEC) had declared the election inconclusive.
Prof. Comfort Obi, Returning Officer of the election, had said a winner could not be declared because not a single ballot was cast in Ihiala Local Government Area, which has a total of 148,487 registered voters.
The margin between Professor Chukwuma Soludo of APGA, who polled 103,946 votes in the election and People Democratic Party’s (PDP) Mr Valentine Ozigbo, who has 51,322 votes, leaves a margin of 52,624