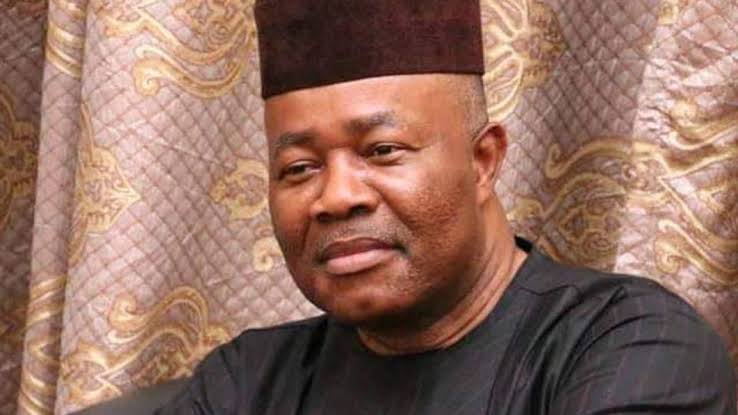 The Minister of Niger Delta Affairs, Senator Godswill Akpabio, has said he did not leave the responsibility for the constitution of the Niger Delta Development Commission board for someone else.

Akpabio, who made the denial in a statement on Friday, noted that reports that he has delegated the task of constituting the NDDC board to someone else was a mere fabrication of sponsored writers in the media.

The statement reads, “My attention has been drawn to sponsored write ups in the media, claiming that I passed the buck on my responsibility for the constitution of the board of the Niger Delta Development Commission (NDDC).

“The write ups, deliberately published while I was outside the country on national duty, reportedly quoted my media aide, Jackson Udom, claiming that I have denied responsibility for the constitution of the board of the commission. I have checked with Mr Udom and he has clearly said he was misquoted.

“While I am not shocked by the mischief inherent in the publication, I am alarmed at the extent of falsehood the writers went in pushing their anti-Niger Delta agenda to scuttle the due consideration of the report of the Forensic Audit by stampeding the government. More alarming is the attempt to drag the hallowed name of our president into this plot.

“For the avoidance of doubt, President Muhammadu Buhari has set out to reposition the NDDC after 19 years of rot, saw to the undermining of the dreams of the fathers of the region, to fast track its development through the setting up of an interventionist agency.

“Part of the strategy was a forensic audit to understand what went wrong, despite the resources committed to the commission over the years.

“The report of that audit has just been submitted to the President, who is studying it to come up with a formula for a commission fit for purpose. That formula is what the board being put together will work with.

“It is not in the interest of the region to stampede the government into aborting the reform process. The President has demonstrated immense love for the Niger Delta and its people. This is reflected in the support he has given to the NDDC to complete some of the projects abandoned over the years, like the headquarters complex in Port Harcourt, the Students’ Hostel at Uyo and the electrification project in Ondo State.

“The President wants to give to the region an interventionist agency that will realize the dreams of our fathers for our people and generations yet unborn. The greatest disservice we can do to the region is to attempt to stampede him, through ingeniously crafted media campaigns.

“I am irrevocably committed to assisting the president to leave behind a legacy for the Niger Delta people, particularly, saving the NDDC from dying like past developmental agencies put together for the region since 1958.”