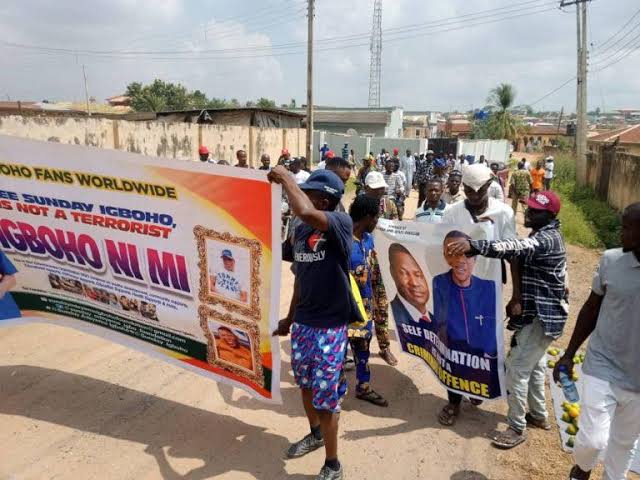 Mr Adeyemo is currently in detention in the Benin Republic over illegal migration among other offences.

The protesters, who were mostly youth, carried placards with various inscriptions demanding the immediate release of the activist.

They started the protest from the residence of Igboho, situated in the Soka area of Ibadan, and marched towards the toll gate on the Lagos-Ibadan expressway.

The protesting youth sang solidarity songs, calling on the federal government to facilitate the release of Igboho from the custody of the Republic of Benin.

READ ALSO: ‘What Buhari told me about Sunday Igboho’s agitation’

One of the protesters, who identified himself as Kareem Adesope, urged Yoruba leaders and other Nigerians to prevail on the federal government to champion the release of the activist.

He claimed that Igboho was innocent of the charges against him and should not be treated like a common criminal.

According to him, Igboho’s fundamental human rights have been grossly abused.

The protest was peaceful and the protesters later returned to Igboho’s residence, where they dispersed.