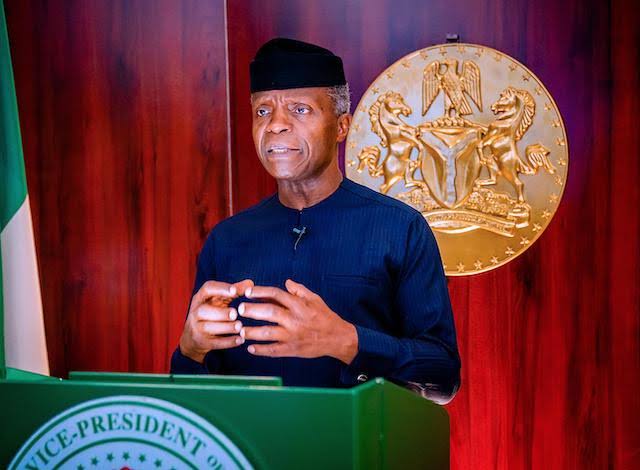 Following a presidential order in 2020, Nigeria was able to effectively tackle the COVID-19 pandemic by deploying a responsive and an effective public health framework, at a time when more developed and wealthier countries were struggling to deal with the fallouts of the global pandemic.

This is a good example of strategic leadership in a crisis, Vice President Yemi Osinbajo, SAN, stated on Friday evening at the public presentation of the book, Winning Leadership, by (Rtd.) Major-General Pat Akem-Vingir.

Prof. Osinbajo added that, with the daunting challenges of the 21st century, such kind of leadership, which can effectively mobilise national and organizational resources to achieve results, is more important now than ever.

“As General Pat Akem argues in Winning Leadership that knowledgeable and agile leadership at the strategic level is one that is able to mobilise resources – human, financial and material – of nations and organisations – in an effective and result-oriented manner,” he said.

According to the VP, “such leadership is able to attain goals and visions and also able to protect and promote interests. In other words, effective strategic leadership purposefully provides direction and inspires.”

Noting how Nigeria effectively tackled the COVID-19 pandemic as an example on leadership in a crisis, the Vice President noted that “one of the biggest surprises for many was how some of the wealthiest and most developed economies of the world were tragically unprepared to handle a public health crisis on the scale and uncertainty of Covid-19. Whereas countries with more modest economic profiles, quickly deployed a public health framework that was responsive and effective.”

He further said Nigeria’s COVID-19 response has been celebrated locally and internationally as a result of such strategic leadership.

The VP mentioned the establishment of the Presidential Task Force on COVID-19, an inter-ministerial interagency team led by the Secretary of the Government of the Federation (SGF) as a reference. The PTF coordinated the national response, set the rules and briefed the nation daily for months, Prof. Osinbajo recalled.

He said, “the task force swiftly issued and enforced COVID-19 protocols for travel and general movement. We restricted travel into Nigeria before most OECD countries did. Once the first case was discovered, the African Center of Excellence for Genomic of Infectious Diseases, in Ede gave Africa the first genomic sequence for Corona virus SARS 2.

“When the first doses of vaccines came, the task force developed the protocols and the public health system already used to mass vaccination campaigns, deployed across the country in every nook and cranny of Nigeria so that the first eligible vaccine candidates received their vaccinations seamlessly.”

Buttressing his point on strategic leadership, Prof. Osinbajo said such kind of leadership requires imagination, clarity of vision and effective implementation, because of current global challenges, changes and opportunities.

The VP further noted that, “as a nation, the threats to our corporate existence today are unprecedented and hitherto unimagined. It is against this background that the author’s prescriptions have to be taken seriously. As he pointed out, exceptional leaders do not just emerge, they are the products of deliberate efforts in policy making, training and grooming.”

While acknowledging that “there are no silver bullets that leaders can deploy to solve 21st Century economic, social and security challenges,” Prof. Osinbajo stated that “only knowledgeable, well developed, trained and motivated leaders will win.”

The VP explained: “The strategies and techniques of yesterday will not work today, in the corporate workplace, in our public institutions and even in our homes. Thanks in no small part to the leaps made in technological advancement.

“The advent of social media has completely changed the nature of human interactions, and with that has added layers of ambiguity and complexity in state-corporate relations. In terms of human capital, what drives today’s workforce is very different even from just two decades ago.

On the book itself, Prof. Osinbajo described it as an essential contribution to the existing body of knowledge on the subject of strategic leadership.

He also noted that its public presentation was timely and “coming at the most auspicious moment in our nation’s history.”

The VP added that the book offered multiple pathways through which leaders can tackle unique challenges of current times which he said demanded new paradigm in leadership.

Highlighting the author’s vast experience in both combat and a successful administrative experience locally in the Nigerian Military and in service to the UN and ECOWAS, the VP stated that “Major General Pat Akem-Vingir has outdone himself with this important new book, and he has articulated military strategies and fresh thinking on the concept of strategic leadership.”

“There are many books and ideas on leadership but one of the reasons why I think this book Winning Leadership is unique is that it draws from the best scholars in the world on the subject—leaders of advanced militaries and C-suite leaders of international organisations and institutions,” the VP added.

Dignitaries at the book presentation, where the author expressed appreciation for the support and encouragement he drew from serving Nigeria in the military, included the former Chief of Army Staff, retired General Azubuike Ihejirika, who represented former Head of State, General Abdusalami Abubakar, as Chairman of the event.