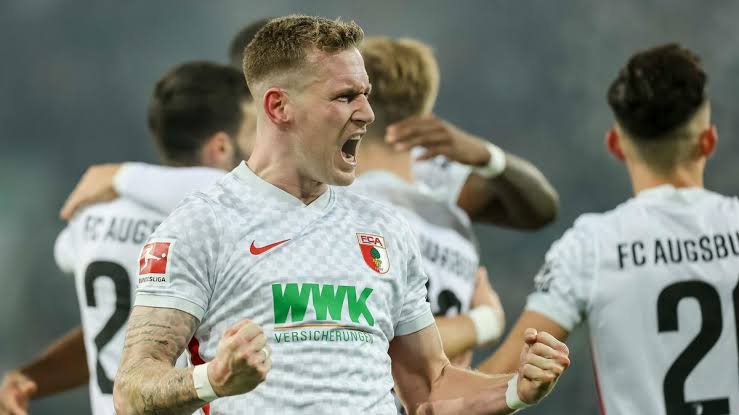 Augsburg move out of the Bundesliga relegation zone after producing a shock 2-1 win over champions Bayern Munich.

The result for Augsburg means they leapfrog Stuttgart into 15th. For Bayern, meanwhile, the end to their four-game winning streak in the Bundesliga sees them remain four points clear of Borussia Dortmund at the top of the table. Dortmund host Stuttgart on Saturday afternoon.

For all of Bayern’s possession dominance it was Augsburg who took a surprise lead in the 23rd minute. Iago’s dangerous cross into the box was cleared by Lucas Hernandez and out to Pedersen, who drove his shot into the bottom corner.

Their second goal came in similar fashion 15 minutes later as Bayern failed to create any dangerous opportunities. Marcel Sabitzer’s poor giveaway in Bayern’s half was capitalised on as Iago’s cross from the left flank was headed into the bottom corner by Hahn.
Bayern replied almost instantly through Lewandowski who grabbed his 22nd career goal against Augsburg one minute later.

Leon Goretzka’s cross was flicked on by Thomas Muller at the near post to the Poland international, who clinically volleyed into the bottom corner to get the champions back into an absorbing contest.

Bayern were flat in a scrappy second half and were reduced to half chances by a resolute Augsburg defence. Lewandowski blasted over the bar from close range in the 50th minute while Goretzka followed suit with a similar effort moments later.

After substitute Alphonso Davies saw a driven strike roll agonisingly past the post, the best chances for Bayern to equalise came in the final ten minutes. Lewandowski’s shot inside the Augsburg box was well saved by Rafal Gikiewicz before Davies fired the rebound over the bar.

And as Augsburg sat even deeper, Jamal Musiala’s curling shot was batted away by Gikiwicz before Muller’s rebound deflected wide. Bayern continued to press, but Augsburg would hold on for one of the most famous results in their Bundesliga history.

Bayern were simply lacklustre against a defensively solid Augsburg side and blew their chance to extend their lead at the top of the Bundesliga table.

For Die Bayern it was as if the majority of the team expected the winner to arrive and perhaps having Robert Lewandowski up top can lead to complacency.
Dortmund take on Stuttgart tomorrow knowing the game now carries extra importance.

MAN OF THE MATCH – Iago

The Brazilian set up both of Augsburg’s goals with two dangerous crosses and Benjamin Pavard struggled to contain him on the channel.

For all of Augsburg’s fine defending, it was the 24-year-old who provided the two only moments of attacking brilliance from the hosts.