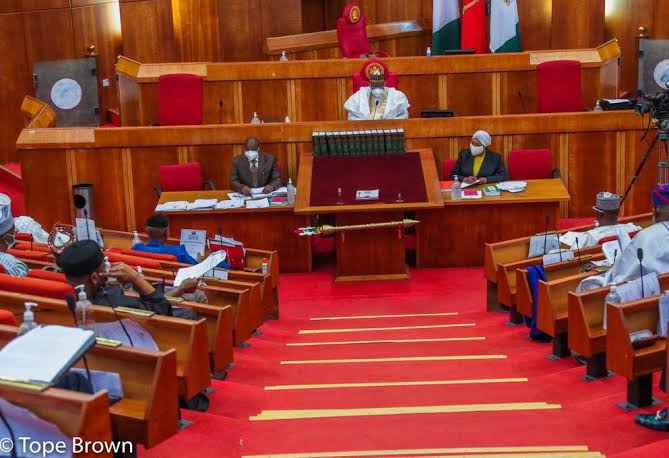 The Senate on Thursday disclosed that the passed Electoral Act Amendment Bill 2021 by the National Assembly will be transmitted to President Muhammadu Buhari this week for assent.

According to the Senate, President Buhari will sign the bill into law especially with the direct primary method for picking candidates by political parties in the amended Electoral Act against the backdrop that direct primary would take democracy to the grassroots, adding that with what the President has been talking about, the method will allow people who are card-carrying members of the party can decide who should be their candidates.

The Senate has last week passed the much anticipated harmonized version of the Electoral Act (Amendment) Bill, 2021after both the Upper Chamber and the House of Representatives deliberated extensively on the report of the Conference Committee on the bill as a way of returning democracy to the people.

With the passage, the National Assembly gave its nod to the electronic transmission of election results by the Independent National Electoral Commission, INEC.

Although the Upper Chamber was initially rooted for indirect primary, it made a U-turn and supported the direct mode.

Speaking with Journalists yesterday in Abuja, Chairman, Senate Committee on Independent National Electoral Commission, INEC, Senator Kabiru Gaya, All Progressives Congress, APC, Kano South who expressed optimism that the President will sign the amended bill into law, said that the Senate will test all the voting machines to be used by the electoral umpire before the 2022 elections.

“The National Assembly will transmit the bill to the President this week for assent and we expect that he will sign it into law by the grace of God.”

Speaking on the Electoral Act, Senator Gaya said, “It amendments were made based on the views and requests of Nigerians. I believe that it will help to guarantee free, fair and credible elections in the country.”

On Anambra State gubernatorial election, he says, “We keenly watched the Anambra governorship election and we realised that Bivas have serious problems.

“We are surprised that the machines malfunctioned at the Anambra governorship election because they worked perfectly when INEC demonstrated them for us at the committee. We have agreed to try the machines in other elections coming up in 2022 so as to determine their functionality before the 2023 general elections.

“We still have the Ekiti and Osun elections coming up. However, INEC is already working on the solution so that we would not have problems in 2023.

“I will not agree that it is a case of sabotage because it is an electronic device that could fail but we already have provisions for spare. If a machine fails, a new one would be brought in.

“It is even good that it happened in the Anambra governorship election. If it had happened at the general elections, it would be a catastrophe.

” Unlike in the past when funds for elections were not released a few weeks to elections, this time, we specifically mentioned that part of the funds meant for the election must be provided a year before the election.

“That is why we have a proposal for partial release of N100bn for the 2023 general elections in the 2022 budget. We are hoping that we could get further funding before the election.

“The N100bn will allow INEC to order materials that it would need ahead of the elections including machines that could be manufactured here in the country.