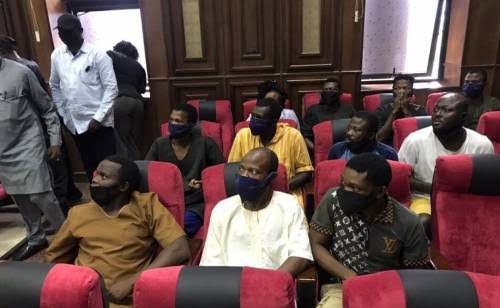 The arraignment of two aides of Yoruba Nation agitator Sunday Adeyemo popularly called Sunday Igboho could not hold following the absence of an interpreter.

The Federal Government through the Department of State Service is prosecuting the aides – Jamiu Oyetunji and Amudat Babatunde –  on a 5-count terrorism charge.

According to the FG, the defendants were involved in acts of terrorism and were found in possession of prohibited firearms.

When the matter came up on Monday, counsel to the defendants Pelumi Olajengbensi, told the court that his clients do not understand English and they needed an interpreter.

Efforts by the court to get an interpreter proved futile, a situation that forced the trial Judge Justice Obiorah Egwuatu to adjourn to January 24, 2022, for arraignment.

Babatunde Amudat and Jamiu Oyetunji were arrested in a joint operation carried out by the DSS and the Nigerian Army on 2nd July at the residence of Sunday Igboho.

Monday’s arraignment comes a few weeks after the two aides were released by the DSS.

Initially, the DSS had apprehended 12 persons linked to Igboho; however, after a brief legal tussle in August, the DSS released 10 of the aides in September.

The remaining two were held back for a few more weeks and were finally let go in October.

However, the DSS was not satisfied with the ruling of Justice Obiora Egwuatu of the Federal High Court in Abuja on August 4, ordering to release all 12 detained associates of Igboho, and as such, the agency went ahead to slam a five-count terrorism charge against the last two aides.