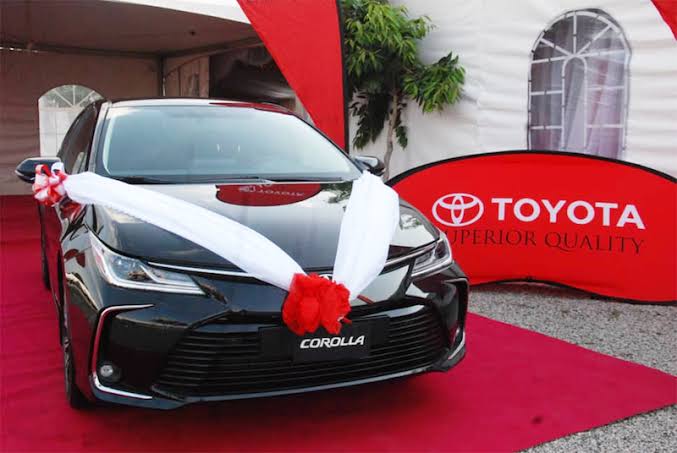 Toyota Nigeria Limited literally lit the just concluded Abuja motor fair with the launch of the latest Corolla sedan into the nation’s market.

The Corolla was the only new vehicle (model) unveiled at the 2021 Abuja auto fair.

Toyota Nigeria also used the opportunity to introduce the new Starlet, RAV 4 and other new models from the Toyota family.

The launch of the latest Corolla is coming a few months after the introduction of the totally transformed Starlet in Nigeria, tagged a subcompact sport utility vehicle.

The new Corolla was unveiled at the International Conference Centre venue of the Abuja International Motor Fair by the Director General of the National Automotive Design and Development Council, Jelani Aliyu, who was represented by Director, Industrial Infrastructure Development Department at the council Dr Noah Omisanya.

The NADDC boss affirmed that Toyota remains a reputable brand in Nigeria and across the globe, noting that the Corolla had been a leading model in the market.

According to him, the new Corolla looks outstanding with its unique features and touch buttons.

“The new Toyota Corolla is an improvement on its predecessor both in design and comfort amenities and I am highly impressed that Toyota Nigeria will be assembling it at its plant in Lagos,” he said.

He said he was impressed with the array of models on display at the Toyota stand ranging from sedans to Sport Utility Vehicles, pickup and armoured vehicles.

The Corolla has enjoyed continuous improvement over three decades, according to the TNL, the representative of Toyota Motor Corporation in Nigeria.

Speaking at the unveiling, the Markeing Manager, Toyota Nigeria Limited, Mr. Bayo Olawoyin, noted that the Toyota Corolla had dominated the passenger car segment in Nigeria with its outstanding fuel efficiency, quality features and reliability over three decades.

It is available in petrol engine with electronic fuel injection while the drivetrain is front wheel drive with front Macpherson struct and rear beam col. The transmission is CVT while the power steering is electronic.

The new Corolla is an executive sedan which boasts high ground clearance of 130mm which makes it the best in its segment.

Other features are leather seat, seven inch-multi info display Bluetooth, seven speakers, eco and sport driving mode, auto dual mode air conditioning system, wireless door lock, keyless entry and push button. They are said to be features that leave one to wonder whether the new Corolla is not ahead of its time.