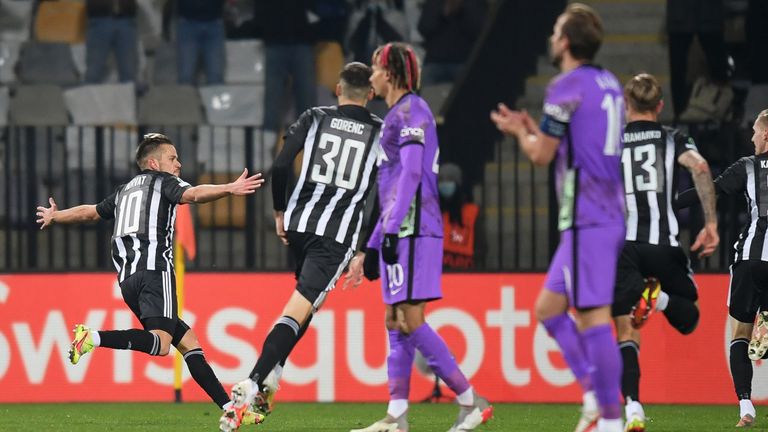 Tottenham’s nightmarish year plunged to new depths as the English team suffered another embarrassing defeat in the Europa Conference League. Antonio Conte’s men were beaten 2-1 by Slovenian minnows NS Mura in the ECL on Thursday.

Spurs will now likely have to beat Rennes at home in their final group game to avoid crashing out of Europe’s third-tier competition.

The former Champions League finalists can no longer catch Rennes at the top of the group, meaning they would progress to the last 32, while the group winners are parachuted into the last 16.

Harry Kane started as one of just two players to be retained by Conte from Sunday’s 2-1 win over Leeds in the Premier League, which had appeared to launch Conte’s reign.

However, the Italian was given an early lesson into the strength of his squad with an embarrassing night in Maribor against a club founded just nine years ago.

Tomi Horvat put the hosts into a shock lead before Ryan Sessegnon’s red card left Tottenham a man down for the final hour.

Kane restored parity 18 minutes from time, but even the introduction of five first-team regulars off the bench in the second half could not prevent Amadej Marosa’s stunning stoppage-time winner.