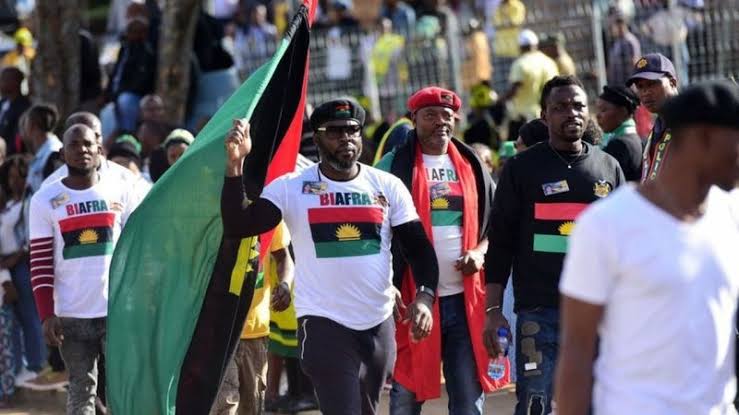 The leadership of the Indigenous People of Biafra has denied the involvement of the Eastern Security Network, in the setting ablaze of houses, shops, and vehicles at Awo-Mmamma community in Imo State.

The group made this known in a statement signed by their spokesperson, Emma Powerful, on Friday.

IPOB blamed the mayhem on suspected security officers who allegedly invaded the community for revenge.

“The fact remains that IPOB is a non-violent movement seeking the peaceful restoration of Biafra. Neither IPOB nor ESN was involved in the mayhem at Awo-mmamma community. Now that the monster they created has gone out of control, they are blaming IPOB for their wickedness,” it said.

The group however tasked political leaders, stakeholders of the southeast zone to resist Boko Haram and Fulani bandits who allegedly work in disguise of security operatives from slaughtering the innocent citizens of the zone.

“Boko Haram are destroying lives and properties worth billions of Naira in the North and the security operatives have never attacked any community in retaliation but they are here destroying Igbo land for nothing. They should know, they will one day account for their atrocities in Biafra land,” it said.

“What did the innocent people of Awo-mmamma do to deserve the destruction of their homes and means of livelihood by suspected security operatives? Why did the suspected security operatives who razed valuable properties at Awo-Mmamma community, go after their attackers but transfer their aggression on innocent folks? What they did at Awo-mmamma is unprovoked destruction of a defenceless community?”

IPOB alleged that the attack was carried out because one of its late ESN commanders, Ikonso, who hails from the community, resisted bandits from occupying Biafra.

“The good people of Awo-mmamma already know who their attackers are. They know that IPOB and ESN were not involved in burning down their shops, properties and buildings.

“The world must hold the security operatives who set ablaze Awo-Mmamma community accountable for their crimes against humanity in Biafra land.

“It is a big shame that the so-called political elite and Igbo leaders are watching purported repentant Fulani terrorists to destroy our communities. Last month they burnt down villages in Awgu, Enugu State, now it is Awo-mmamma in Imo State. Just last week they burnt down two communities in Izombe, Oguta also in Imo State. Who knows where their next target will be, yet their own political elite is watching them?

“The global community must know that IPOB and ESN were not responsible for the burning down of communities in Biafra land,” IPOB noted.