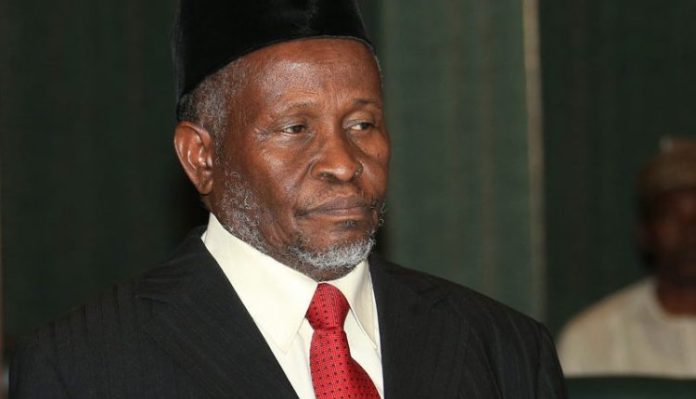 The Chief Justice of Nigeria, Justice Ibrahim Muhammad has warned security agents in the country to stop embarrassing Nigeria’s judiciary.

Justice Muhammad said the Judiciary has had enough of the embarrassment of its Judicial officers and would not condone any act of national embarrassment from security operatives again.

The CJN gave the warning on Wednesday on the occasion of the 2021/2022 legal year and inauguration of 72 new Senior Advocates of Nigeria, held at the Supreme Court

Justice Muhammad declares that the silence of the judiciary should not be taken for granted or perceived to be stupidity, weakness or cowardice.

The CJN gave the warning against the backdrop of the recent invasion of the Abuja residence of Justice Mary Odili of the Supreme Court by unknown security operatives.

“On a very sad note, I must say, we were jolted with embarrassing news of the invasion of the official residence of one of our brother Justices, Hon Justice Mary Peter Odili on Friday, October 29 by men suspected to be security operatives, acting on a search warrant.

“The said warrant was purportedly obtained from an Abuja Magistrate court under questionable circumstances.

“I must make it known to all and sundry that we have had enough dosage of such embarrassment and harassment of our Judicial officers across the country and we can no longer take any of such shenanigans.

“The silence of the judiciary should never be mistaken for stupidity or weakness.

“By the nature of our work, we are conservative but not conquered species and should not be pushed further than this by any individual, institution or agency of the government.

“With time, those taking judiciary as a mere weakling will soon realize that it is from the calmest seas we often experience the fiercest storms.

“The time to oppress, suppress and intimidate judicial officers are gone.

“No one, irrespective of his or her status or position in the country, should test our will because the consequences of such unwarranted provocation will be too dire to bear.

The CJN said that the Judiciary will begin to resist any “clandestine attempt to silence or ridicule us to oblivion.”

He also admonished security officials not to paint Nigeria as a lawless society.

“We should begin to do things that will project it favourably and rightly too, to the international community.

“We are making efforts now to ensure that henceforth, every search or arrest warrant must be issued with the knowledge and approval of the Chief Judge of the respective state or Federal High Court as the case may be”, the CJN said.

He maintained that “No law permits anyone to invade, subdue or overawe any Nigerian citizen in his or her residence with a flimsy, fraudulently obtained search warrant.”