Spurs and Liverpool share the spoils after thriller in north London 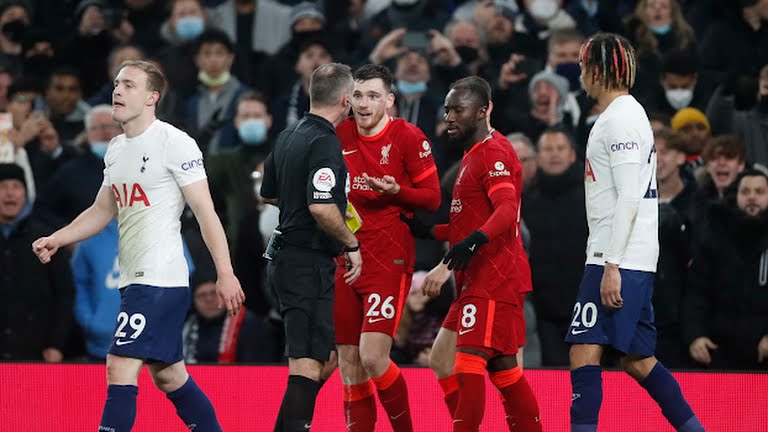 Tottenham Hotspur and Liverpool played out an enthralling draw which saw four goals and one red card in one of the games of the season so far.

Harry Kane fired Tottenham in front with a clinical finish into the bottom corner after being played through on goal by Tanguy Ndombele.

Dele Alli should’ve doubled that advantage moments later when he was found in the box by Son Heung-min with a clear shot at goal but the midfielder’s effort was tipped wide by Alisson Becker.

Liverpool were pulled level in the 35th minute when Andy Robertson’s cross was headed home by Diogo Jota.

The second half continued at the frantic pace that the first half left off and Kane should’ve restored Spurs’ lead when a corner ricocheted into his path but he headed over from four yards out.

Then came what seemed to be Robertson’s hero moment when he nodded Liverpool in front from close range after being picked out courtesy of Trent Alexander-Arnold’s driven cross.

But within minutes the hosts were level again when Alisson failed to clear a through ball allowing Son the opportunity to roll into an empty net.

The game unravelled for the visitors in a matter of moments as Robertson was then sent off following a VAR check for serious foul play after a challenge on Emerson Royal.

Liverpool remain in second but are now three points behind Manchester City while Spurs move up to seventh and are still unbeaten under Antonio Conte.