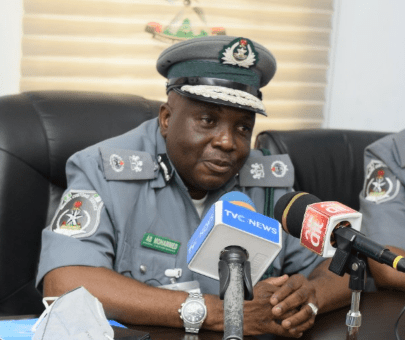 The Nigeria Customs Service (NCS) says it has so far generated N2.3tn revenue into the federation account in 2021.

Mr Timi Bomodi, the Deputy National Public Relations Officer, NCS, disclosed this at a stakeholders/media engagement on trade facilitation in Lagos on Monday.

Bomodi spoke on the topic: “Trade facilitation, a tool for enhanced revenue generation: The NCS perspective.”

“The 2021 has been eventful for NCS, as it achieves major milestones, in spite of the debilitating effect of COVID-19, which has had negative effects on the socio-economic lives of people around the globe.

“The year began with high expectations with regards to revenue generation and the enforcement of fiscal policy and based on 2020 target achieved was given the onerous task of collecting N1.679tn.

“In the current year, the NCS has already exceeded expectations in revenue generation by going beyond the target set for it by the government, achieving N2.3tn,” he said.

He added that in its anti-smuggling activities, the NCS had made landmark seizures of prohibited items and items prohibited by trade.

“In August, the service made seizures of 17,137 kg of pangolin scales, 44 kg elephant tusks and 60 kg in pangolin claws all valued at over N22bn.

“This was made possible through active collaboration between NCS, U.S, the UK, and German officials who helped in tracking the suspicious shipment and led to the arrest and prosecution of some foreign nationals and their local collaborators.

“In October FOU operatives in zone A seized 751 bullets concealed in garri sacks, while arms, ammunition and military uniforms were intercepted at Tincan port Lagos in September just to mention a few.

“Our warehouses in all border formations are overflowing with seizures of rice, groundnut oil, used clothing, used vehicles and others,” he said.

Bomodi said that at Apapa Area I Command, through collaboration with sister agencies and the Nigerian Navy, a landmark seizure of cocaine with a DPV of 54 million dollars was made.

He said that the arrests and seizures were daily features in the activities of customs officers nationwide, and they underscored the fact that they operated in a highly non-compliant environment.

According to him, the NCS is looking forward to a work environment where respect for principles and practice of international trade are the watchwords.

“We hope in 2022, importers, exporters and their agents will comply willingly and take full advantage of the opportunities NCS offers for expedited clearance,” he said.

Bomodi said that to enhance trade facilitation, NCS had integrated and automated over 90 per cent of its activities.

He pointed out that the e-customs project taking off in 2022 would also provide end-to-end automation aimed at eliminating physical contact.

Also, Comptroller Malanta Yusuf of the Apapa Command noted that trade facilitation could not be harnessed and enjoyed without ensuring compliance level of traders.

Yusuf explained that trade facilitation had to do with harmonisation, standardisation, modernisation and automation of trade procedures in the supply chain by deploying minimal resources in order to get great output.

“NCS have deployed tools to ensure that trade was being facilitated for people to carry out their goods on time without it accumulating demurrage, deploy scanners to ensure the use of selectivity in inspection of containers,” he said.

He said that in complying, traders must declare the actual cargo carried the duty, quantity and value of the cargo.

“You cannot hide under trade facilitation and conceal things in the container and NCS will not facilitate such trade,” he said.