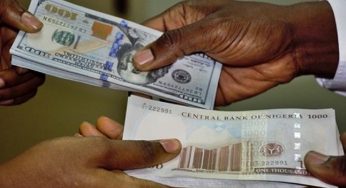 The exchange rate between the naira and the US dollar closed at N415.07/$1 at the official Investors and Exporters (I&E) window.

Similarly, naira depreciated against the US dollar on Friday, falling by 0.09% to close at ₦573/$1 from ₦572.5/$1 that was recorded in the previous trading session. This is according to information obtained from BDC operators.

Nigeria’s foreign reserve reduced by 0.04% on Thursday, 16th December to close at $40.69 billion compared to $40.71 billion recorded as of the previous day. The recent decline in the nation’s external reserve is attributed to the intervention by the apex bank in the official forex market.

Trading at the official NAFEX window

The opening indicative rate closed at N413.83/$1 on Friday, which represents a 30 kobo appreciation compared to ₦414.13/$1 recorded in the previous trading session.

Crude oil prices resumed the week on a bearish note, as Brent crude is currently trading around $70 per barrels, while West Texas Intermediate already fell below the $70 per barrel mark. As at press time on Monday, Brent Crude fell by 3.58% to trade at $70.89 per barrel.

Nigerian crude oil, Brass RIver and Qua Iboe also started the week bullish with 0.147% gain to trade at $75.1 per barrel.

The decline in the country’s reserve level can be attributed to the continuous intervention of the apex bank in ensuring the stability of the exchange rate. The exchange rate at the official window as remained stable in the past four trading sessions.

It is worth noting that the nation’s foreign reserve had gained $5.99 billion in the month of October, as a result of the $4 billion raised by the federal government from the issuance of Eurobond in the international debt market.

In the month of November, Nigeria’s external reserve lost $633.47 million in value as against a gain of $5.99 million recorded in the previous month and $2.76 million gain in September 2021. So far in the month of December, the reserve level has lost $496.1 million, while on a year-to-date basis, the reserve gain has reduced to $5.32 billion.