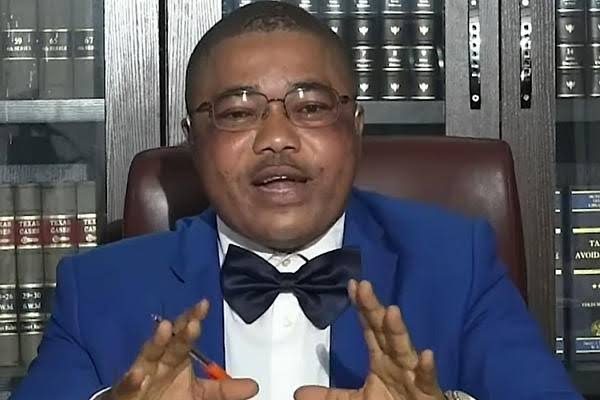 Mr Ifeanyi Ejiofor, the lead counsel for the leader of the Indigenous People of Biafra, Nnamdi Kanu has disclosed that a renowned legal luminary has joined their team, and will henceforth be leading Kanu’s defence at the courts.

Ejiofor gave this hint in a statement he issued on Tuesday, after his routine visit to Kanu in the detention of the Department of State Services.

The IPOB lawyer, who did not reveal the identity of the new attorney, said that lawyer would now be in the frontline of Kanu’s legal battle against the Nigerian government.

He described the unnamed lawyer as a “legal giant, a consummate member of the Inner Bar, a legal Iroko, who has distinguished himself in the practice of law,” and that the inclusion of the attorney to their team is “a surprise Christmas present” for Nnamdi Kanu.

Part of the statement read, “As the lead attorney of Onyendu, I took advantage of the visit to unveil a legal giant, a distinguished and an accomplished member of the Inner Bar, whom I have chosen to fortify our defence team.

“The learned Senior counsel is an excellent and a consummate learned gentleman, distinguished in academics and in the practice of law in our law courts. The reason that informed this arrangement is my unflinching desire to throw in every weapon in our arsenal to ensure that Onyendu gets the BEST at all times.

“This latest masterstroke, evident in the legal giant that has intervened, came to Onyendu as a big surprise. Although he was not oblivious of my arrangement to enlist the assistance and cooperation of a Senior attorney, he did not know that I could get a senior attorney of the rarest breed.

“He was particularly delighted to welcome this legal giant, a consummate member of the Inner Bar, a legal Iroko, who has distinguished himself in the practice of law when we visited him yesterday.

“I must state here and now that the Senior attorney involved has been my mentor over the years. He has worked from the sidelines with our legal team since 2016.

READ ALSO: My freedom from DSS prison will happen like a miracle – Nnamdi Kanu

“He is a man imbued with profound intellect, legal sophistry, an infectious sense of history, much like Onyendu, and of impeccable character. His brilliance radiates effortlessly. He is indeed an excellent advocate.

“The stage which we have attained in the court gymnastics involving Onyendu signposts an auspicious time at which to introduce the leading and erudite member of the Inner Bar to our defence team.

“Henceforth, he will lead our defence team in proceedings in court. Further, in the course of our interaction with Onyendu, the legal giant singled me out for commendation. He paid me effusive compliments for my steadfastness, devotion, commitment and fidelity to Onyendu. He also variously referred to instances to buttress his conclusion.

“Onyendu, with a smile on his face, nodded repeatedly in approval. I was particularly touched by these references and it further fortified my firm resolution to the cause of Onyendu.

“I must state that the visit we paid to Onyendu yesterday was the best so far. Onyendu himself acknowledged this fact. Throughout the visit, he continuously referred to it as ‘A SURPRISE CHRISTMAS PRESENT’.

Ejiofor, also stated that Nnamdi Kanu is however disappointed at the many impostors that have infiltrated IPOB to desecrate the values of the group.

“This class of persons include those who desecrate his command and control policy. Onyendu is particularly irked at their conduct,” the statement said.

“Further, he could not hold back his anger at the activities of deviants to the cause whose main preoccupation is the perpetration of mischief that is targeted at setting back the gains that have been recorded thus far.

“Onyendu condemns the activities of such deviants completely. He regards them as moles among his followers and assures them that their designs will soon catch up with them.

He “has also urged his followers to exercise caution and restraint in all their undertakings. He harps on the need for his followers to be civil, show understanding and remain focused on the cause, particularly in this trying period.”

Ejiofor also vowed not to relent in his drive to secure the release of IPOB members detained at various parts of the country.

“I must hasten to declare to you that we are not relenting in our firm resolve to secure the release of other members who have been unjustly and unlawfully incarcerated in the various detention facilities of Nigeria’s security agencies all over the country. Some of those persons include Ada Nsukka, Idara, and others, who were recently abducted by lawless and overzealous agents of the state. I assure you that in due course we will effectively utilize the instrumentality of the law to set them at liberty.

“The mere fact that we do not publicise our legal interventions in the social media space does not mean that we are not taking concrete and effective steps to secure the release of all those unjustly detained.

“I assure you that we have been taking effective steps and implementing concrete measures geared towards that.

“We have opted to desist from publicising to you our legal exploits for certain salutary reasons.

“It has also become necessary that we show such restraint because of the presence of moles who have infiltrated and literally taken over the social media space.

We are now being circumspect, UMUCHINEKE. I must inform you that some members have been released recently. We have advised them to maintain some level of privacy in their interactions. We will not relent in our avowed determination to ensure that every member of IPOB in any detention facility in Nigeria is set at liberty within the shortest possible time.”