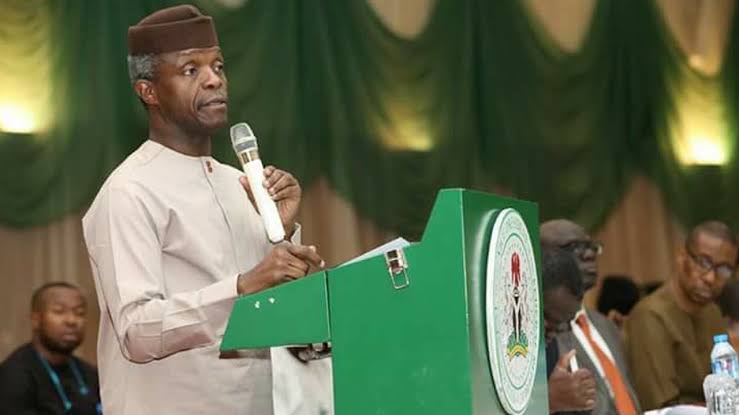 Osinbajo stated this at the inauguration of the Review of Baseline Report and Realignment of the National Statistical System with SDGs 2020 on Tuesday in Abuja.

According to him, the inauguration completes and officially initiates the process of realigning the National Statistical System with the requirements of the SDGs.

“It is as we have heard a product of the data mapping exercise, and the design and execution of the SDGs Data Bond.

“The Federal Government is committed to guaranteeing the sustained production of relevant statistical information needed for effective tracking and monitoring of SDGs in Nigeria and so fully supports the partners in this important enterprise.

“Namely, the Office of the Senior Special Assistant to the President on SDGs, the National Bureau of Statistics (NBS) and the entire National Statistical System with this Launch, we will be able to track our progress on the SDGs on an annual basis.

“Also, as this report itself observes, in order for the SDGs to be truly sustainable, they must be integrated into plans and policies.

“This is precisely the approach that we have taken beginning from the Economic Recovery and Growth Plan (2017 – 2020), the National Poverty Reduction with Growth Strategy (NPGRS) the Economic Sustainability Plan (ESP).

“Our short-term response to the adverse impact of the COVID-19 Pandemic,–and now the National Development Plan (NDP)– 2021-2025 which was approved by the Federal Executive Council only last month.”

The vice president said that NDP’s core components included human capital development, infrastructure and social development all of which were vehicles for achieving the SDGs.

He said that more specifically, the plan identified as areas of emphasis and action, agriculture, food security and rural development, water resources, sanitation, social protection and health and nutrition.

According to him, these thematic areas mirror the SDGs and anchor the NDP very tangibly to the achievement of the goals.

“Our approach ensures that the SDGs are central to our national development efforts and are indeed policy priorities for the foreseeable future.

“Clearly all of these policy and planning documents bear the imprint of the SDGs as overarching national priorities.’’

Osinbajo said that the grand ambition of the SDGs was to engender an economically sustainable, socially inclusive and environmentally resilient world.

He said that for Nigeria, and indeed Africa as a whole, the achievement of the SDGs was crucial to ending poverty, hunger, disease and safeguarding the environment,

“For our administration, our objective of achieving sustainable development , which means creating wealth, decent jobs, reducing poverty, addressing the issues of climate change – is both consistent with the aspirations of the SDGs and central to our entire vision for the country.

“This is why in May 2019, the president made a public commitment to lifting approximately 100 million Nigerians out of poverty within a 10-year period,” he said.

He commended the Senior Special Assistant the President on SDGs, Princess Adejoke Orelope-Adefulire, for her passion and commitment to the enormous task of meeting SDGs commitments.

Osinbajo also lauded the Statistician-General of the Federation, Dr Simon Harry, for his leadership in the important process.

In her remarks, Hajia Zainab Ahmed, the Minister of Finance, Budget and National Planning, announced that the NDP 2020-2025 recently approved by the Federal Executive Council, would be inaugurated by President Muhammadu Buhari and presented to the public on Wednesday.

Ahmed was represented by the Director, Macro-Economic Analysis in the ministry, David Adeosun.

Earlier in his speech, Harry said that the report of the realignment process was considered a veritable instrument for driving the SDGs programme in Nigeria.

“As a coordinator of the system, the NBS is determined to ensure the institutionalisation of the entire system,’’ he said.

In her address, Orelope-Adefulire said that the presence of the vice president at the event underscored the importance Federal Government attached to statistics as the implementation of the SDGs required statistical data.

The vice president, after inaugurating the report, also unveiled 19 ambulances to support and strengthen healthcare system at the sub-national level.

Monitoring the 230 indicators with the 169 targets of the 17 Global Goals requires employing good strategies that would ensure resource allocation to priority areas.

To achieve this, government initiated the process of realigning the Nigerian Statistical System with the SDGs.

This is aimed at strengthening and repositioning the NSS with a view to ensuring synergy and effective collaboration amongst data producers, suppliers and users.