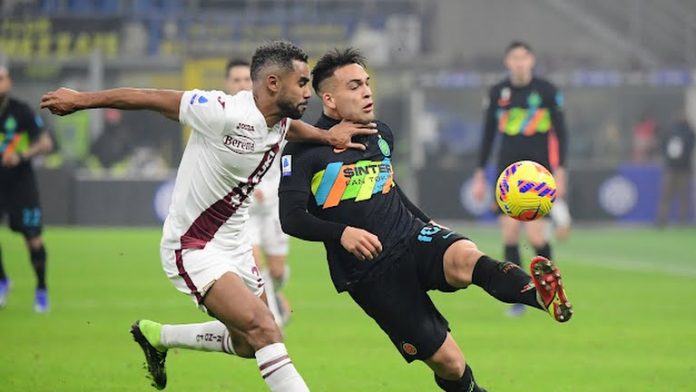 Inter Milan made sure that they would be at least four points clear at the top of Serie A over Christmas by beating Torino 1-0 on Wednesday before their title rivals stepped onto the pitch.

Already ensured of first place over the winter break, which starts on Thursday and ends on January 6, the champions sit seven points ahead of Napoli and AC Milan thanks to Denzel Dumfries’ winner on the half-hour mark at the San Siro.

Dutch wing-back Dumfries met Edin Dzeko’s pass with a calmly-placed finish after a rapid break, making sure it would be a happy Christmas for the blue-and-black half of Milan.

Napoli and Milan now have to win their final matches of 2021 — against Spezia and at Empoli respectively — to stay in touch with an Inter team who have won seven league games on the bounce, collected six straight clean sheets and are by some distance Serie A’s top scorers with 49 goals.

On this occasion, however, Inter were underwhelming and could have found themselves a goal down before Dumfries scored had Marko Pjaca’s delicate shot from the edge of the area squeezed in the right side of the post with Samir Handanovic completely immobile.

However, despite a strong performance from Torino, who sit 11th, that was the last real opportunity that the away side created and Inter would have had more had Lautaro Martinez not fluffed a one-on-one in the 39th minute and Alexis Sanchez not hit the post late on.

Roma missed the chance to close the gap on the Champions League places after a 1-1 draw with Sampdoria at the Stadio Olimpico.

Jose Mourinho’s side thought they were set to move four points behind fourth-placed Atalanta, who drew at Genoa on Tuesday when Eldor Shomurodov drilled home the opener in the 72nd minute.

But Manolo Gabbiadini snatched a point with his fifth goal in as many matches eight minutes later to move Samp nine points clear of the relegation zone and leave Roma sixth on 32 points.

The capital club are level with Fiorentina who sit seventh after only managing a draw at Verona, a match which featured two of the league’s most in-form strikers in Dusan Vlahovic and Giovanni Simeone.

However, it was Kevin Lasagna who opened the scoring for Verona in the 17th minute when he collected Gianluca Caprari’s through ball and slipped home a neat near-post finish, only for Gaetano Castrovilli to level with a diving header nine minutes from the end.