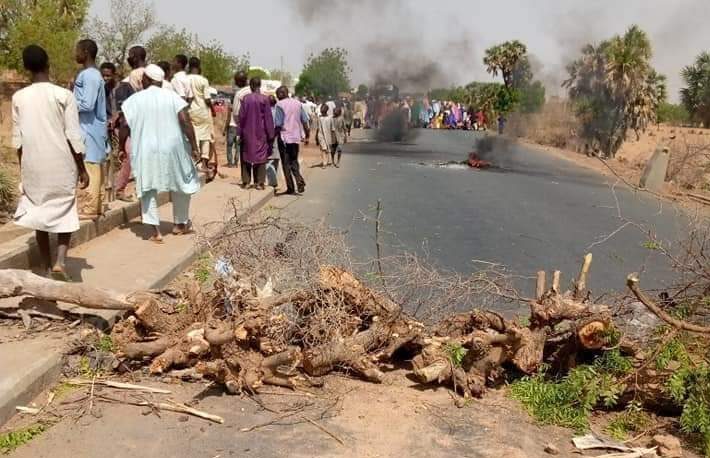 Some aggrieved residents of communities along Funtua-Sheme Road in Katsina state have blocked Funtua-Gusau Road over the spate of bandits’ attacks.

A traveller, Imam Abubakar, told newsmen that commuters were left stranded by the protest.

He said, “We are trapped here; I cannot tell the number of vehicles plying the road that are blocked by the protesters. As we speak with you, we can hear gunshots as police and military men are deployed to the area, but the protesters have blocked the road, burning tyres.”

Bandits had reportedly attacked some communities around the area where they killed seven persons and abducted five women.

Sources said the incident took place in the Faskari local government of the state during an overnight attack.

The source reportedly noted that the villages were attacked around 9 pm on Monday.

Reacting to the incident, Mr Shehu Dalhatu, the Deputy Speaker of the Katsina State House of Assembly, who is the member representing the Faskari constituency, said there were about four bandits’ attacks in the area within a week.

The lawmaker said he raised a motion on matters of urgent public importance, where he prayed before the House, calling on the government to scale up its measures against banditry in the state.

“The situation is dire and authorities must rise up to the occasion. We must protect the lives and properties of the people who gave us their trust. It is disheartening to see them being killed all the time,” he said.

The Police spokesperson in Katsina, SP Gambo Isah, has yet to confirm or deny the incident as od the time this report was filed.