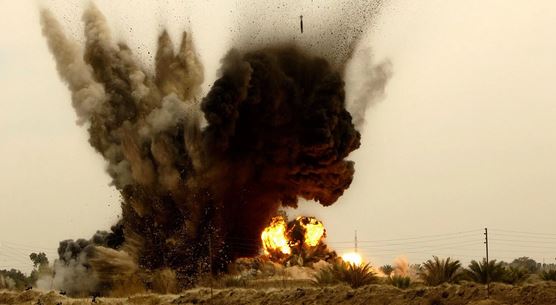 The blasts which came a few hours before President Muhammadu Buhari’s visit to the state left about eight persons injured.

According to reports, the explosion occurred in three different locations – Bulumkutu, Ajilari Cross and Ayaje.

There were casualties recorded in Ayaje and Bulumkutu, however, no information has been obtained from Ajilari.

The bombs believed to have been fired from outside the town began to land on different locations around the airport at about 10:45 a.m.

Witnesses and security sources familiar with the development confirmed that at least five motorized explosives landed in mostly residential areas, killing and injuring many civilians.

Quoting a source, Premium Times said one of the bombs landed in the Ayafe suburb of Ngomari, killing four persons including a 16 years old girl.

Other bombs landed in Ajilari Cross, Moromti and at the Legacy Housing estate in Bulumkutu.

Movement of people has been restricted in Maiduguri ahead of the visit of President Muhammadu Buhari who is visiting to commission projects in the state.

An operative of the Civilian-JTF, Malam Saad, who is the commander of Sector 9, confirmed to journalists on the phone that about four people were affected by the explosion.

Yusuf Ibrahim, a resident of Bulunkutu, said “two teenage girls have been killed: one at Ayafe and one at Ajilari Cross.”

The president finally landed at the Maiduguri International airport at about 11:40 a.m.

President Buhari is billed to commission an edifice donated by Mohammed Indimi to the University of Maiduguri.

He is also expected to commission some projects executed by the Borno State Government.

It is not clear at this time if the president’s itinerary will be affected by the explosions.