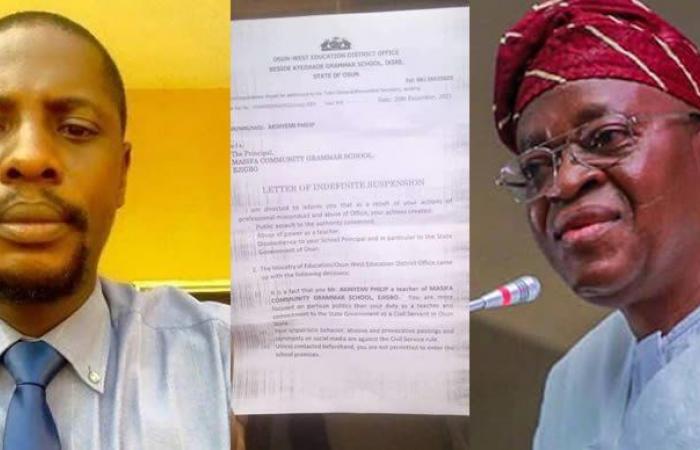 He was also accused of using uncouth language against the state governor, Adegboyega Oyetola.

The teacher’s suspension letter, sighted by our correspondent on Wednesday, was issued by the Osun-West Education District Office and dated December 20, 2021.

Prior to his suspension, the Office of Tutor-General had earlier queried Akinyemi.

The query read, “Your postings and comments on social media for some times have been inciting and have shown that you have derailed from what you were employed to do as a teacher. You are more focused on partisan politics than your duty as a teacher and commitment to the state government as a civil servant in Osun State.

“Your comments and postings have shown a great disrespect to the state government and the governor who is committed to regular payment of wages and salaries. Investigation showed that several people have warned you against such provocative and controversial postings, including your colleagues and Principal, but you turned a deaf ear to their warnings.”

After investigation into the matter, the letter suspending the teacher indefinitely, also obtained by our correspondent, said the action put up by Akinyemi constituted public assault to concerned authority.

The letter read, “ You are more focused on partisan politics than your duty as a teacher and commitment to the state government as a civil servant in Osun State.

“Your unpatriotic behaviour, abusive and provocative postings and comments on social media are against the civil service rule.”

When contacted, the Special Adviser to the State Governor on Education, Jamiu Olawumi, explained that Akinyemi’s colleagues had raised a petition against him over his involvement in party activism which they said was affecting his primary assignment.

Olawumi said, “He was queried by the school principal. But the query aggravated his misdemeanour, daring nobody could punish him even according to general order.

“However, before he would become bad influence, the case was reported to Tutor-General who further investigated him and found him culpable.

“He employs uncouth language on the person of Mr Governor without caution with a lot of false claims. We really allowed due process before sending him on suspension. He was not sacked.”