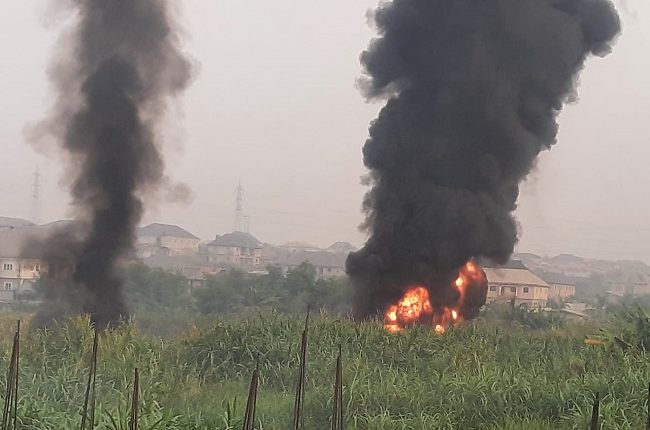 There was panic in some parts of Lagos Friday morning as a petroleum pipeline exploded in Isale Odo, LASU Road, Egbeda.

It was learnt that this followed the collapse of a 330kv line high tension pole at the powerline bus stop along LASU/Isheri Road, Lagos.

The collapse of the pole is said to have emanated from the Eghin Hydropower station. The line came in from Ikorodu across Ikeja and other areas.

According to Ibrahim Farinloye, the Southwest Coordinator of the National Emergency Management Agency, the electric cable collapsed and led to sparks all over the area.

He said, “The electric cable collapse led to electric sparks all over the area and the sparks got to the spilled content of PMS around the area which led to the pipeline gutting fire and subsequent explosion.

“The pipeline corridor has been known to have spillage often due to activities of vandals.”

He said that Power Service agencies especially Ikeja Electric Distribution Company and others are trying to isolate the 330 Line for safety reasons.

According to him, the pipeline fire explosion does not pose any threat to human and public lives.

The fire is still raging but Farinloye said that the NNPC security and NSCDC were on the ground to control the situation.

Although there is no confirmation of death, the explosion was said to have sent residents scampering for safety.

When asked about the number of casualties, she replied, “I am not in a position to state that. But the explosion is true.”

Residents of the area, who took to social media to seek help, hinted that there are casualties.

However, our correspondent could not immediately confirm that as of the time of filing this report.

One of them, @IamHorlapo, posted, “A year ago, we woke up to a gas explosion in Baruwa. Today, it’s another Pipeline explosion in the same Local Government which has claimed life and property. God, have mercy upon us in this community.”

@iamoliver_may22 added, “Guys, please. My street in Baruwa is burning. Guys, please send help to Baruwa… There is a gas explosion and there is a power line in that area.”