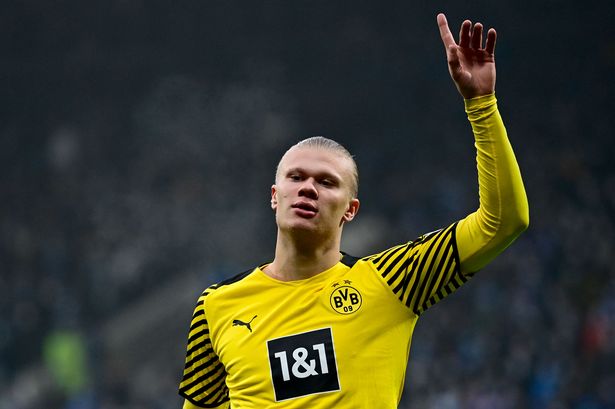 Amid growing speculation that Erling Haaland is set to leave Borussia Dortmund in the near future, the 21-year-old hotshot is being tipped to create history in England’s top flight.

Former Premier League great Joe Cole has tipped Erling Haaland to “break all the records” should he make the move to the Premier League.

The in-demand Borussia Dortmund forward is attracting interest from top clubs all over Europe and is expected to embark on a new challenge next summer when a reported £68million release clause becomes active.

Having hit 76 goals in 74 appearances for the Bundesliga outfit since joining from RB Salzburg in January 2020, the 21-year-old has emerged as one of Europe’s hottest talents alongside Paris Saint-Germain ‘s Kylian Mbappe.

With both looking set to move in the upcoming transfer windows, former Chelsea midfielder Cole has discussed the prospect of either sought-after striker joining the Premier League, but tipped Haaland in particular to go on and create history.

“Mbappe is probably a more rounded player, but I think Haaland just excites me,” admitted Cole. “It’s just the way he runs, I think he’ll develop into a leader as well.

“I think a leader of men as he gets older I think he’ll be a captain.

“I think if he comes over, at the age he is at now, he will go and break Shearer’s record. If he stays for ten years, I think he will break all records.”

The former England international added that if one of the top Premier League teams were able to seal the deal for either Mbappe or Haaland, they would immediately become title favourites, such is the potential the two players possess.

“I think the crazy thing is they’re both flirting with leaving their clubs so the Premier League will be on notice,” he added.

“If one of them come to any of the top three, they’re automatically favourites for the title next year because there’s only a handful of players out there that you can put into that top three and make them better.”

Speculation surrounding Haaland’s future in particular has ramped up in recent weeks after his agent Mino Raiola dropped a number of hints regarding the possibility of a change of scenery in the near future.

Raiola told SPORT1: “Maybe this summer, maybe the summer after. But there is a big chance that Erling will leave this summer. We will see.

“He can and will take the next step. Bayern, Real, Barcelona, Manchester City – these are the big clubs he can go to. City have won the Premier League five times in the last few years, much more than Manchester United.

Agent Mino Raiola recently fuelled speculation surrounding Haaland’s future
“We all knew when we moved to Dortmund that this step would come.”

While it appears on the face of it that City lead the race out of Haaland’s Premier League suitors, both Manchester United and Liverpool are reportedly keen to push through a deal.

It remains to be seen where Mbappe and Haaland will end up, but the prospect of Premier League records being shattered is certainly an exciting one.