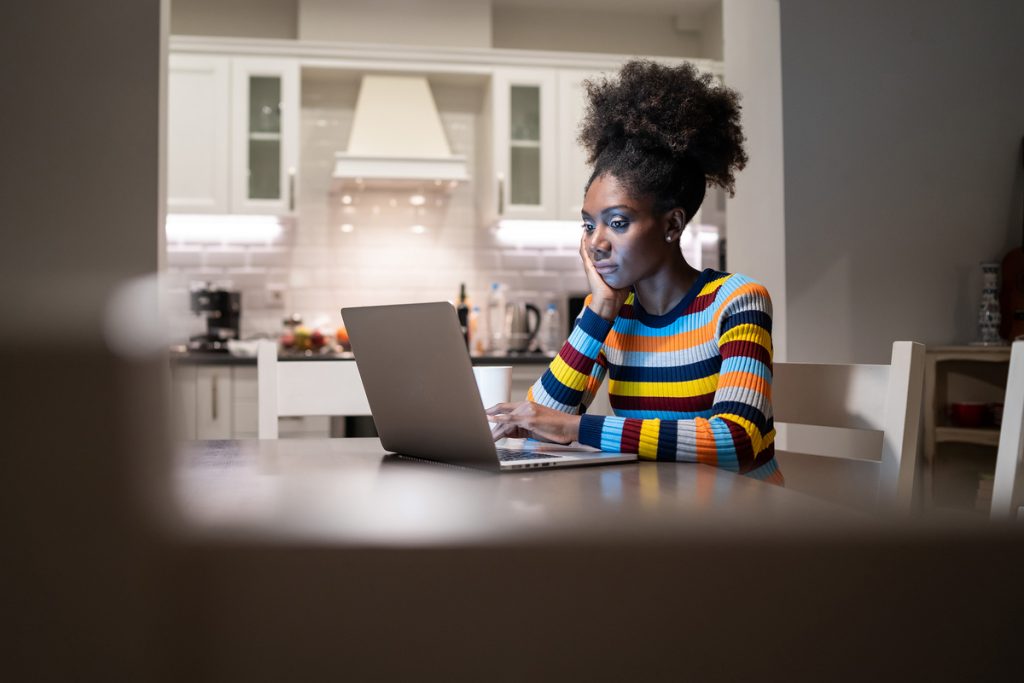 Disruption in the workplace due to the coronavirus pandemic has made Seun Adeola, a technology consultant based in Lagos, Nigeria rely heavily on the internet to work from home.

But like many Nigerians, Seun complained bitterly of exorbitant data costs and poor servicing by Mobile Network Operators (MNOs) and Internet Service Providers (ISPs) in the country.

“I have worked remotely for most of the past year. I pay about N2,000 per week for about 7GB of data, which doesn’t last for the entire week. I often find myself resubscribing before the week runs out,” she said.

Seun said she would ordinarily love to subscribe to a higher data package, but this means higher expenses.

“A 75GB monthly data package costing N15,000 would be okay for me, but that means data alone will be costing a good percentage of my salary,” she said.

Should she be doling out N15,000 on data per month, Seun would be spending 50% of Nigeria’s minimum wage of N30,000 – which has not even been approved by many state governments and private firms – on data alone.

However, Seun is not the only Nigerian complaining of paying exorbitant prices to access MNOs’ data services.

Amid the shift to working from home occasioned by the COVID-19 pandemic, many Nigerians – like their counterparts across the world – now rely heavily on data services provided by telcos, albeit without numerous tales of “extortion” by the telcos as data costs remain unaffordable for many.

Asides from high data costs, some networks have also remained slow, unstable, and unreliable. Many times, subscribers suffer hours-long network outages, unable to conduct business or contact their loved ones. In many cases when services are restored, subscribers are not offered any compensation for missing out on important business due to the data outage.

For example, after a prolonged outage on October 9, MTN users were again forced on October 16 to spend several hours with poor or no data, SMS or call services. As ‘compensation’ for this, MTN apologised and refunded users the amount of data they were able to use in the blackout period, while many subscribers received a paltry 1MB of data as compensation, a move that seemed rather insulting to many users. MTN officials later stated that the 1MB compensation was an error.

Data services alone have come to form a bulk of Nigeria’s telcos over the years. With the shift to working from home, analysts said the figure would shoot up. According to the subscriber/network data report released by the Nigerian Communications Commission (NCC), Nigerians spent over N100bn on data subscription alone in 2020.

Some analysts believe that telcos are able to rake in billions of naira as revenue from data services alone due to overcharging of the subscribers. The analysts’ position may be backed up by the position of the Alliance for Affordable Internet (A4AI), an initiative to make the internet more affordable worldwide.

A4AI sets data affordability benchmarks for governments at “1 to 5”.  The target encourages governments across the world to ensure that the cost of 5GB of broadband, both mobile and fixed, should not be more than 2% of the population’s average monthly income by 2026.  This is a step up from its 2015 target of 1GB of mobile broadband data priced at 2% or less of average monthly income. According to ofcom.org.uk, in 2020, the average person made use of 4.5GB of data per month, a figure which is likely to go higher as time progresses.

Nevertheless, based on the average monthly cost of living, the “1 for 5” target would mean that Nigerian telcos will have to sell 5GB of data for approximately N900 (that is, 2% of N43,200).

However, as of December 2021, Nigerians purchase 5GB of data at an average price of N1,500 from MNOs, including the four biggest, namely MTN, Glo, Airtel, and 9Mobile.

Meanwhile, it is also important to note that in 2020, the National Bureau of Statistics (NBS) said that about 40% of the country’s population lives below the poverty line, earning less than $1 daily.  As of December 2021, a dollar officially trades for about N410.

When AF24News spoke to Nigerians about data costs, respondents expressed that they have struggled to keep up with the pricey data options. Most acknowledged that weekly and monthly data plans never last for the duration of time that the data would be valid, leading them to often resubscribe over and over.

Kelechi Osinachi, a corps member who teaches at a school in Uyo, Akwa Ibom state capital, said she subscribes to a 6GB weekly plan from her network operator, yet still never enjoys the service because the data runs out quickly.

“I have to resubscribe every single time. 6GB lasts for like 3-4 days, and yet I’m not a heavy data user,” she said, frustrated.

According to Kelechi, she only uses the data for social media use, while avoiding downloading heavy media, and for staying in touch with her family, who are based in Lagos.

Joseph Matthews, an internet entrepreneur, said he can no longer cope with the exorbitant prices of data. “I am a public speaker and I also manage websites for a living. My job requires me to be online 24/7, but the data offerings are expensive,” he said.

Amajuoritse Ovie, an engineering student, said he pays N5,000 for an Airtel monthly subscription (20GB). “Of course, It doesn’t last me for a month and I always have to resubscribe,” he said.

Moses Bello, a store manager, also said he spends more than N15,000 on data monthly. “This is despite how difficult the economy is. I cannot cope with these costs,” he said.

Jennifer Udo,  a sales representative, said she subscribes for 10GB of data from MTN, “but it doesn’t last a whole month despite not being a heavy user.”

Nigerians adopt both mobile and fixed wireless broadband services. Mobile broadband is used in mobile devices, and lets subscribers make use of smartphones or tablets to access the internet wirelessly through a mobile phone network using cellular data. The data bundles offered by telecommunication service providers like MTN, 9Mobile and co are mostly used by Nigerians via mobile broadband.

On the other hand, fixed broadband refers to the operation of wireless devices or systems in fixed locations such as homes and offices. Fixed wireless devices are not mobile or portable battery-powered, and are usually connected to a power source. Hence, although they are faster (their delivery of networks over smaller areas means low latency) fixed wireless broadband services are not portable. This is what is offered by internet service providers like Spectranet, FiberOne, Tizeti, among others.

Woes of fixed broadband in Nigeria

Even though many users have adopted the use of fixed broadband services that offer unlimited data options for a monthly fee, the rate of adoption has been slow. Looking at consumer dissatisfaction and high costs, analysts said it is not hard to see why.

According to the UN Broadband Commission on Sustainable Development’s Target, two for 2025, entry-level broadband service in developing countries should cost less than 2% of monthly GNI per capita. Investigations by AF24News found that Nigeria’s fixed broadband pricing surpasses this by 20.8 per cent.

For instance, the offerings of two of Nigeria’s popular fixed broadband operators, Tizeti and FiberOne, cost between N11,500 and N17,000 for entry-level plans. These prices represent almost 40% of the average monthly cost of living of an average Nigerian. Hence, analysts believe that fixed broadband services are not for the average Nigerian, but probably for the elite and upper-middle class.

Probing cause of high data costs

In 2021, 51.44 per cent of the Nigerian population were internet users, a figure that is predicted to grow to 60 per cent in 2026. Internet access is now so important that it is almost considered a basic human right, yet, the costs are too expensive for the majority of the population.

Even though there are many problems to be solved in the telecommunications industry, the most pressing seems to be that of exorbitant data costs.

Although the cost of mobile broadband services falls within the UN’s target, it is still expensive. According to the UN, broadband in developing countries has a median price of 2.5 per cent of GNI per capita, compared with only 0.6 per cent in developed countries.

On September 30, the Minister of Communications and Digital Economy, Isa Pantami, disclosed plans of the Federal Government to make the Internet cheaper and more affordable for Nigerians.

For telcos, it is speculated that the presence of Over-The-Top (OTT) operators such as Facebook and WhatsApp, which offer messaging and call facilities via the internet, may have begun to affect the revenue of mobile operators.

For instance, mobile networks charge an average of ₦4/SMS and 11kobo/second for every phone call, rates that are far expensive in comparison to a WhatsApp text or audio call. Hence, in theory, losing revenue on this front could be a driving reason for the telcos forcing Nigerians to pay exorbitant rates.

However, the NCC subscriber/network data report shows that the revenue for mobile operators increased by almost N250bn in 2020. Also, operational costs dropped by about N20bn. The value of assets of the country’s Mobile Network Operators also grew to N3.44tn in 2020 from N2.93tn in 2019.

Multiple efforts made to the major telcos and ISP providers were futile as their representatives did not respond to AF24NEWS’ calls and text messages.

The President of the Association of Licensed Telecoms Operators of Nigeria, Mr Gbenga Adebayo, also did not respond to enquiries despite multiple attempts.