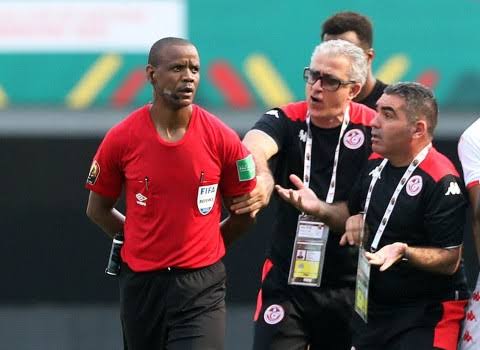 Janny Sikazwe, the referee who blew up early for full-time twice during Mali’s win over Tunisia at the ongoing Africa Cup of Nations, suffered sunstroke, according to reports.

Sikazwe was immediately rushed to the hospital after the match, according to French newspaper L’Equipe.

“Amid these chaotic scenes, Janny Sikazwe was taken to hospital, having suffered from sunstroke – which could explain his baffling decision-making.

“It would also explain why the fourth official was set to take charge of the remaining minutes of the match, had it been resumed,” part of the report read.

Sikazwe was previously suspended under allegations of corruption in 2018, due to the manner in which he handled a CAF Champions League match between Espérance Sportive de Tunis of Tunisia and Primiero Agosto of Angola.

Reacting to the controversy that surrounded the game, the Confederation of Africa Football said, “In relation to the TotalEnergies Africa Cup of Nations match between Tunisia and Mali played in Limbe on 12 January 2022, CAF is gathering all the necessary reports from the officials at the match.

“CAF is forwarding these documents to the competent bodies of CAF.

“At this stage, CAF is not in a position to make further comment until the responsible bodies indicate the way forward.”

The AFCON match between Mali and Tunisia on Wednesday ended in confusion amid bizarre scenes as the Tunisian team complained that the referee had blown the final whistle too soon.

Zambian official Sikazwe signalled the end of the match and a 1-0 win for 10-man Mali in the coastal town of Limbe first at 85th minute and later at 89 minutes and 47 seconds when the game restarted.