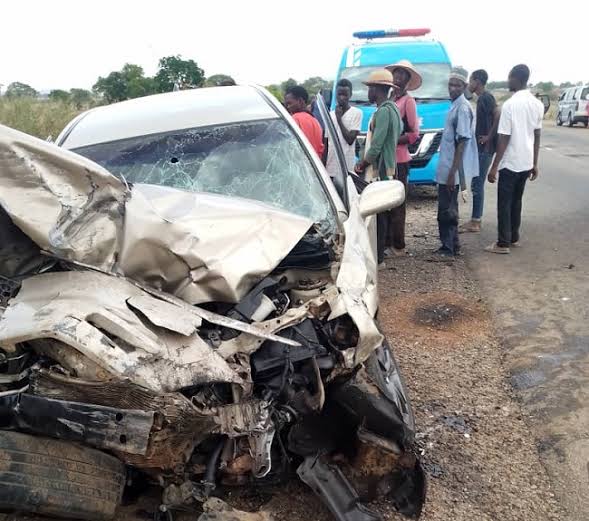 Six people were reportedly killed while two others sustained serious injuries in a fatal accident that occurred at Falokun on Ilorin-Offa express road on Thursday afternoon.

The multiple accidents, according to the Federal Road Safety Corps, involved two private cars; a Peugeot 406 and a Mazda which were travelling in opposite directions.
The two cars which were conveying eight passengers had a head-on collision with six of the occupants died on the spot.
Kwara State Sector Commander, Jonathan Owoade, who confirmed the incident, attributed the accident to a violation of the speed limit and wrongful overtaking on the part of the drivers.
According to the RTC report made available to our correspondent by the FRSC, the multiple crashes involved a grey Peugeot 406 Saloon car with registration number RBC 424DW and a blue colour Mazda 323 private car with registration number BWR 590BJ, both of which were carrying eight people; three male adults, three female adults, and two female children.

Six of the occupants of the two vehicles died while two (one male adult and one female adult) sustained fractures and bruises.
The Sector Commander said that the injured were taken to the General Hospital, Offa for treatment while the corpses of the dead persons were deposited at the mortuary of the same hospital.
He said that goods and properties recovered from the scene of the accident were handed over to the Police at Ajase-Ipo police station.