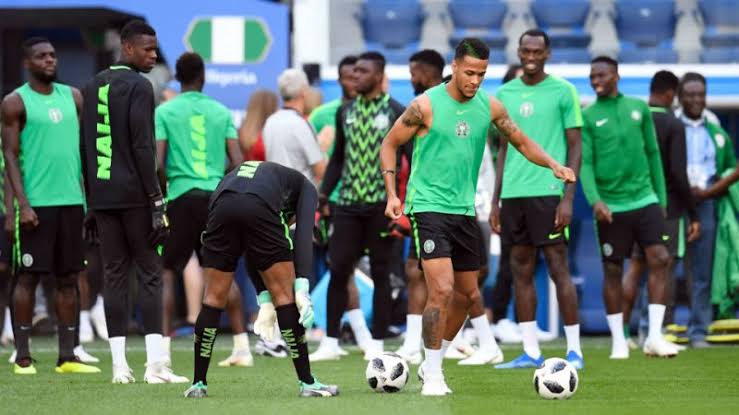 Super Eagles attacker, Moses Simon, has given reasons for the improvement in the team’s performance under Austin Eguavoen.

He said this while fielding questions from reporters in Garoua on Friday.

According to him, Eguavoen allows players to display their talents freely.

Eguavoen’s squad was without forwards Victor Osimhen, Emmanuel Dennis and Odion Ighalo for a variety of reasons, but his team went on the offensive from the kick-off and did him proud against Egypt, winning 1-0.

Speedy winger Moses Simon played a major role when the Super Eagles took the lead at the 30,000-capacity stadium.

Super Eagles will play their second game against the Falcons of Jediane (Sudan) at the Stade Roumdé Adjia in Garoua.

The Nigeria Football Federation appointed Eguavoen as the Technical Adviser of the Super Eagles on an interim basis after sacking Franco-German Gernot Rohr in December 2021.

Moses Simon said, “Of course, It was my best performance in the last two years. You know we changed the coach and, of course, the tactics. So every coach has his own mentality and how he impacts players.

“With the previous coach, I played on his instructions, but the current coach gives the freedom and allows us to bring our style of play at our clubs.”

Eguavoen featured for the Nigeria senior team for 11 years, between 1987 and 1998, during which he lifted the Africa Cup of Nations in 1994, held aloft the Afro-Asian Cup the following year, played in three AFCON finals (it could have been six but he missed the 1990 finals in Algeria; Nigeria withdrew from the 1996 finals and; was barred from the 1998 competition) and featured at the 1994 and 1998 FIFA World Cup finals. He won a total of 51 senior caps.

As coach, Eguavoen was assistant to another former captain Christian Chukwu when Nigeria finished third at the 2004 finals in Tunisia, then led the team to win another bronze in Egypt two years later. He is one of only 15 indigenous coaches to have taken charge of the Senior Men National Team of Nigeria, and also one of the 15 African coaches at these finals in Cameroon.

As Head Coach, the hard-as-nails defender has the most win-record with the Super Eagles, winning nine of his 12 matches in charge between 2005 and 2007, and is one of only three coaches to have steered an African country to the top 10 of the FIFA rankings (the other two being Clemens Westerhof and Egypt’s Hassan Shehata).