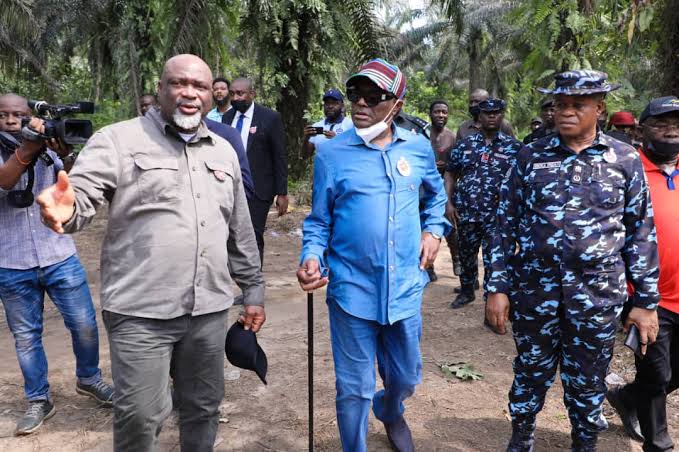 Nyesom Wike, Rivers governor, says he will fight soot pollution in the state and ensure that operators of illegal refineries are brought to justice.

Recall that the governor had directed security operatives to go after and arrest 19 suspected operators of illegal refineries in the state.

He said his administration will no longer tolerate the illegal act which has caused death and diseases for residents of the state.

“They can’t be doing this and killing my people. No reasonable government will allow that. And I can tell you with all due respect that we will take this matter very seriously,” Wike said.

“Look at how every day in your house, you see soot. I mean, how can you allow that? So, this one that we can solve, we will solve it.

“We have assured the people of Rivers state that we will fight this matter to the last until I leave office.”

He said confronting the illegal activities will not be easy but his administration will approach it like a war using every legal backing.

He added that his government will not consider sentiments in clamping down on culprits, saying no matter how highly placed the perpetrators may be, they will not be spared, but will be made to face the full force of the law.

Wike directed Zacchaeus Adangor, attorney-general of the state and commissioner for justice, to set up a legal prosecution team and take over the case files of illegal crude oil refinery operators arrested by the police.

“Attorney-general, all these matters with the police, you have to retrieve the files so that you can prosecute the matters on your own. I don’t want any compromise anywhere,” he said.

“It will not be on the ministry. You have to constitute a legal team. Go and get our friends all over the country so that we can execute this prosecution to the last.

“It is a serious matter. And I’m going to take it head on. In fact, it is a war. It is not poor people doing this, they’re a cartel. You must go and arrest these people; Chief W. J. Wocha, you must arrest Fubara Ohaka, and Chief Promise Ezekwe. You must arrest them.

“It doesn’t matter how highly placed you are. If you like, be the paramount ruler. In fact, any traditional ruler that is involved, pick him for me. Let him understand that the law does not respect anybody.”

The governor directed Chidi Lloyd, chairman of Emohua LGA, to locate places where processed crude oil products were being stored and ascertain their sources.

He blamed the federal government for failing on its promise of setting up modular refineries in the state but said he will ensure the illegal activities no longer hamper the health of Rivers residents.

“I have said to the federal government, if you’re not willing to do anything, don’t promise people anything. You told them that you will do something, how can you promise modular refineries? What I’m talking about is the safety of Rivers people. That is more important to me,” he said.