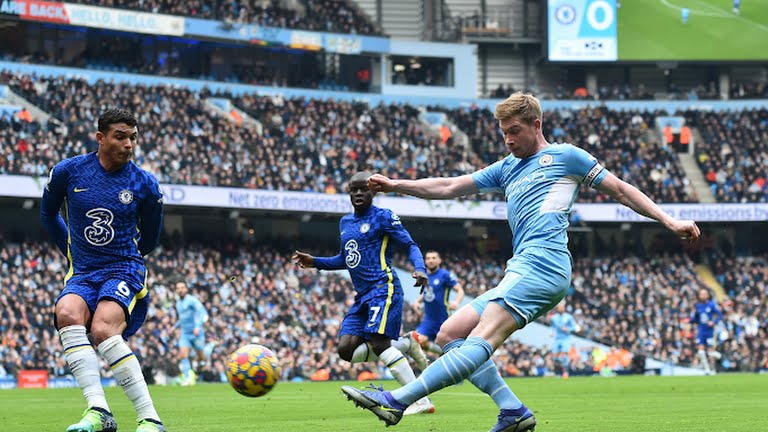 Manchester City made another significant push towards their title defence after a 1-0 victory over Chelsea on Saturday afternoon increased the gap between them and the second-placed London club to 13 points.

Again, a Kevin De Bruyne strike made the difference in another tight encounter between the two rival clubs.

Manchester City almost went ahead in the fourth minute when Chelsea goalkeeper Kepa Arrizabalaga came racing off his line to clear, and smashed the ball against team-mate Cesár Azpilicueta. Luckily for the visitors, the ball only went out for a corner.

Chelsea’s first dangerous attack came in the 10th minute when Romelu Lukaku looked to have slipped Hakim Ziyech in behind the City defence, but the pass was too long and the offside flag was up anyway.

John Stones then had a chance to head City in front from a corner, but his effort was saved comfortably by Kepa.

Jack Grealish had a gilt-edged chance to score on the 39th-minute when Kevin De Bruyne pressed Mateo Kovačic into losing the ball in a dangerous area, but Kepa came out and made a great save to deny him.

0 – Chelsea failed to attempt a shot in the first half at the Etihad; the first time they've failed to do so in a Premier League game under Thomas Tuchel, and first time overall since May 2018 v Newcastle. Sheltered. pic.twitter.com/lBBLcUcmF0

Lukaku had Chelsea’s best chance of the game at the start of the second half when he was played in by Kovačic, but Ederson saved with a strong hand.

City thought they’d been awarded a penalty in the 55th minute when Marcos Alonso brought down Raheem Sterling in the box, but the flag was up for offside against Kyle Walker.

The next chance came in the 68th minute when Phil Foden played Sterling in down the right, but the winger could only drag his effort wide.

But the breakthrough came for City a couple of minutes later, when De Bruyne wriggled away from an N’Golo Kanté challenge before bending the ball beautifully past Kepa from 20 yards.

Chelsea almost hit back immediately, but Aymeric Laporte did well to block substitute Timo Werner’s effort at the other end.

Foden and Grealish then had chances to wrap it up for City, but Kepa was equal to both efforts.