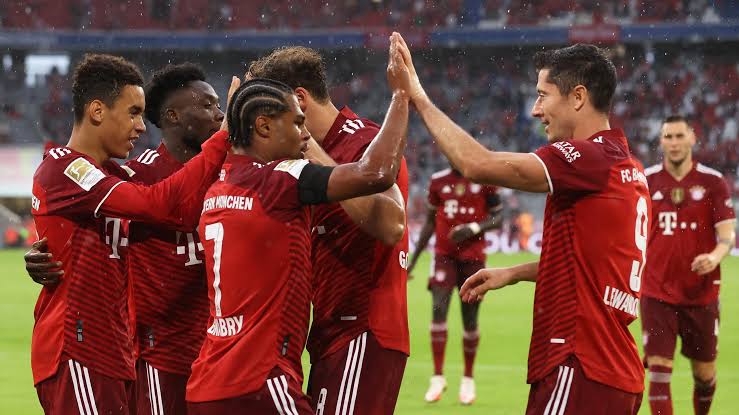 Bundesliga title holders Bayern Munich face their first away game of 2022 when they travel to 1. FC Köln in the Bundesliga on Saturday with kick-off 15:30 CET, GMT.

The champions want to quickly get back to winning ways after the defeat to Borussia Mönchengladbach and ensure they at least maintain their six-point lead at the top.

Bayern completed their final training before travelling to Cologne in their new Teamline training range.

FCB have quickly put their opening Rückrunde defeat to Gladbach behind them. The Bundesliga leaders now want to show a different side to themselves away at Köln. “We want to play a different football again, what we’re used to from us,” defender Benjamin Pavard promised. “We’re going there to win and bring back the three points.”

Things are still tight in terms of player fitness (see below), but anything other than a first win of the year is out of the question for Bayern in Cologne. “It’s clear we’re the favourites. It’s also clear we want to win,“ coach Julian Nagelsmann said. “Our job will be to get a better result than we did against Gladbach.” The defending champions still lead the way in the Bundesliga after 18 games, six points clear of Borussia Dortmund, who host Freiburg on Friday night.

Köln have climbed up to sixth in the table on the back of three straight wins and now want to keep that going at home to the champions. “We go into every meeting with the approach of wanting to win the game, also against Bayern,” said forward Mark Uth.

“We’ve created that confidence. The Cologne club have 28 points after 18 games, which is their second-best return since the turn of the century. They also showed in the reverse fixture how tough they are to beat this season.

“You always have to stay at it and believe in yourself. We believed in ourselves against Bayern,” said coach Steffen Baumgart of Köln’s 3-2 defeat in Munich in August.

The visitors could have claimed a point after coming from 2-0 down to level at 2-2, which gives the 50-year-old boss a desire for more. “It’s a stimulus for every coach to beat them, it’s huge. But that’s also the biggest challenge. I’m looking forward to that. I calculate we’ve got a chance to win the game,” Baumgart added.”

Apart from Bouna Sarr and Eric Maxim Choupo-Moting, who are away at the Africa Cup of Nations representing Senegal and Cameroon respectively, Bayern are also without the injured Josip Stanisic (thigh), Leon Goretzka (knee problems), Kingsley Coman (muscular) and Lucas Hernandez (in isolation) for the Köln fixture.

Nagelsmann also explained that Alphonso Davies also won’t be involved due to “signs of myocarditis”. However, several players did return this week following their periods in isolation. Manuel Neuer is fit to start, but Dayot Upamecano, Omar Richards, Corentin Tolisso, Leroy Sane and Tanguy Nianzou are not expected to feature from the off.

Köln coach Baumgart welcomed Sebastian Andersson, Jorge Mere and Kingsley Schindler back to training this week. The 50-year-old revealed that they are options for the squad. However, Marvin Obuz and Timo Horn are ill, while Ellyes Skhiri is away at the AFCON with Tunisia.

What the coaches say

Julian Nagelsmann said: “What impresses me most [about Köln] is that they have an attacking concept. They are always brave in getting at you, defend very high and play high pressing. They do that regardless of whether they’re playing a relegation fighter or a title contender.

“It’s a shame there will only be a few spectators there because there’s always an emotive atmosphere in Cologne. It’ll be a great Bundesliga game with two teams wanting to get forwards.”

Steffen Baumgart (1. FC Köln) said: “We’ll try to play our game, but that’s particularly tough against Bayern. We might find ourselves in some moments automatically dropping deeper, but we want to stick to our way of playing.

“It’s a challenge every time to play Bayern. They‘re a team who deserve the utmost respect and are the best team we have in Germany.”